Another prominent man of God is being accused by a former church member of sexually assaulting numerous young girls in church.

Victoria Remi Nkong took to Facebook to accuse Bishop Akinola Michael Fowowe  of sexually assaulting her when he was a pastor with Winners Chapel and she was a girl. She said she opened up to her sister and her sister revealed the Bishop had done same to her. Another one of her sisters, outraged at what the Bishop had allegedly done to them, stormed his office to confront him and that was when they allegedly discovered he had done same to other young girls.

Victoria revealed the Bishop was eventually sent away from Winners Chapel after he impregnated a JSS 3 student and gave her money to sort it out.

She went on to accuse his wife, Mrs Joke Fowowe of being complicit because she was allegedly aware of the mess he was making yet she kept helping him cover it up while cleaning up his meds.

Dear Bishop Akinola Micheal Fowowe, after yesterday’s reveal by Busola Dakoko I feel quite compelled to speak my truth & save other possible victims from becoming real victims.

Have you sincerely given your life to Christ & stopped the molestation of unsuspecting females, young girls & married women alike? there is non of us without sin & mistakes but that is if we truly and sincerely realise our mistakes and seek forgiveness from God and as many of our victims as possible.

You remember several years ago when you were posted by @Winners Chapel to serve as the senior pastor and all the things you did there? how you drew close to my family and gained our trust despite the fact that my parents weren’t members of Living Faith Church? We called you “DADDY”
That period I came home to visit after senior WAEC, yes that period that you kept coming to our house & telling me to come & visit you in the church office, you’ll say: “Come and see me in church around 12:30-1pm, by that time they’ll be no one in church and we will have time to talk”, I’ll promise to come but I won’t show up because when I tell my mum, she will ask me not to go.

One day you asked me if I need permission from my mum to come & I said yes, you asked what I told my mum & I said I repeated exactly what you said & you asked me not to do that again, that you’re my father in the Lord so I owe you more respect. I asked why you wanted me to come to church & you said you wanted us to discuss the upcoming YOUTH WEEK & the part I could play to make the youth week successful.

I eventually didn’t show up and some weeks later I had appendicitis, I was given antibiotics as I cried against an operation, I got better. You heard of it and you came to my house on Wednesday after evening service, you spent about 2hours praying for me, my dad and my mum & my elder sister Franca Nkong who was also home on holiday. Then there was power failure and you asked me to take a torchlight and walk you out to your car which you parked outside the compound.

We had barely stepped out of the door when you put your hands on my shoulders from behind and I asked why, your response was “the man of God can’t afford to fall so you should be infront in case of any danger” then you giggled. I was uncomfortable & shrugged your hands off carefully.

As soon as we got to where your car was parked, just by the mechanic shop that was behind my compound, you quickly turned me around and pushed my back to your car, things moved really quickly, you used your knees to pin me to the car & unbuttoned the first 2 buttons of my shirt with one hand, your voice changed, “you don’t love me anymore Victoria, you don’t write me letters when you go to school” I was confused & scared “daddy stop it please, which letters are you talking about”? I asked; you continued trying to touch me in different places with one hand while unbuttoning your trousers.

As God will have it, there was bright light coming from the head lamps of a car that was driving into the driveway and you immediately adjusted, placed your hand on my head & started praying “It is well with you, sickness has no place in your body”. You pushed me aside, got into your car and drove off.

I went back to the house, I was in tears, I cried so much & my big sister found me out & questioned me, I told her what happened & she was furious. Fast forward a few weeks my immediate elder sister came home & when she heard my story she confirmed that you had tried something similar with her in your parlor at home, your wife was even around & you were trying to grab my sister’s breast when your wife moved to the dining.

My big sister Comfort Ntaji Nkong eventually confronted you in your church office & we found a lot of other girls had things to say about you.

That incident left a terrible mark on me & my believe in God. I remember the first time I saw you on Facebook how furious I was that you had opened a church of your own, my immediate thoughts were for the unsuspecting parents and young girls that may become your victims. I immediately commented on your post which was later deleted.

Mrs Joke Fowowe you seemed a very nice lady but I kept wondering why you remained silent while he did all the things that he did, cos the scandals kept coming in some of which j heard you helped him clean up. It is wrong to be silent in the face of evil, imagine I was your daughter or the JSS3 girl that he got pregnant who I hear was given money to undo the pregnancy was your daughter before Winners’s Chapel eventually sent you people away.

I run an Orphanage and I have 23 children children in my home out of which 13 are girls. I can’t imagine a man molesting & abusing my girls. I cried through out yesterday, the flashes of how you tried to arouse my sexual senses at age 13 kept coming to me. I fought so many people on social media who thought Busola story wasn’t logical, mine wasn’t logical but it is my truth. I thought I had healed years back but yesterday proved me wrong & I now understand why I’m almost anti-male & anti-marriage.

YOU OWE ME APOLOGY(eventhough this may not heal the wounds or makeup for the sleepless nights that followed with me tryingto understand & make sense out of your actions), YOU OWE SO MANY BROKEN GIRLS WHOSE LIVES YOU DESTROYED IN THAT SMALL COMMUNITY AN APOLOGY, YOU OWE GOD APOLOGY & above all I hope girls in your church are SAFE.

PARENTS please keep your children safe, ask them questions, question the closeness of that uncle or that clergy man: ESPECIALLY the religious leaders, a lot is going on in this world.

Unfortunately not every woman gets a man like Timi Dakoko who stood by his wife, helped her healing process till she spoke. Some of us may never be able to accommodate intimacy for life because memories of things like these live with us especially when it happens severally kn a society that doesn’t encourage you to speak up. We need to stop SEXUAL ABUSE 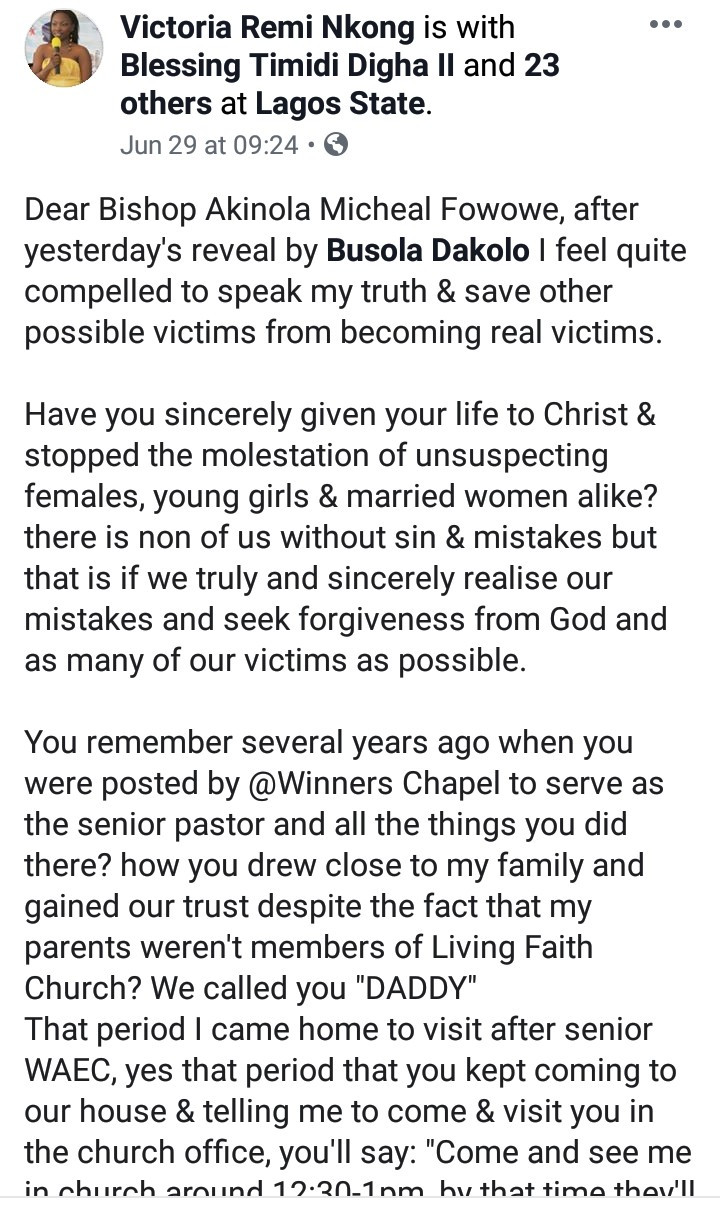 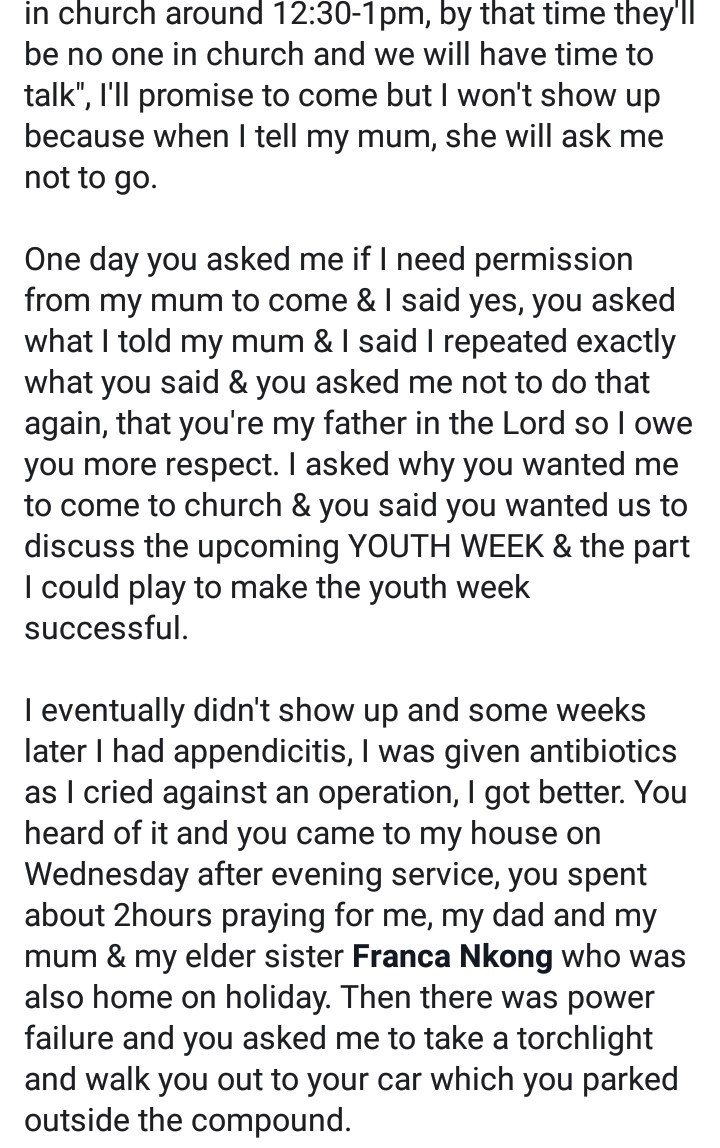 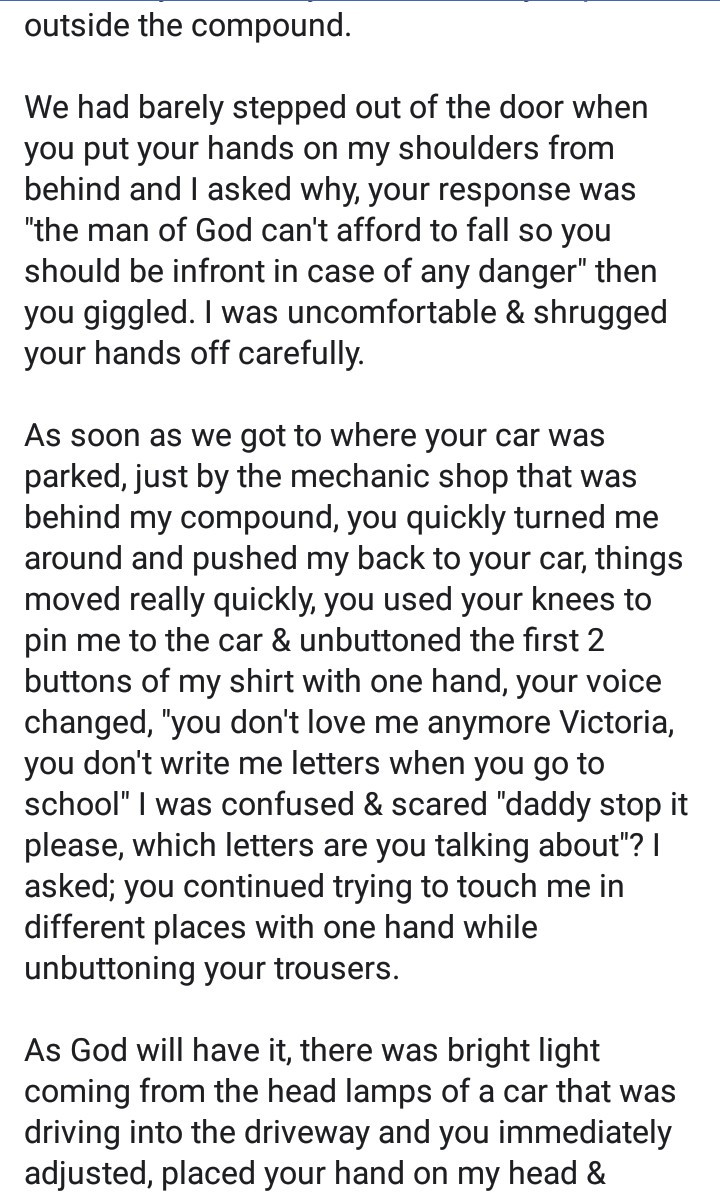 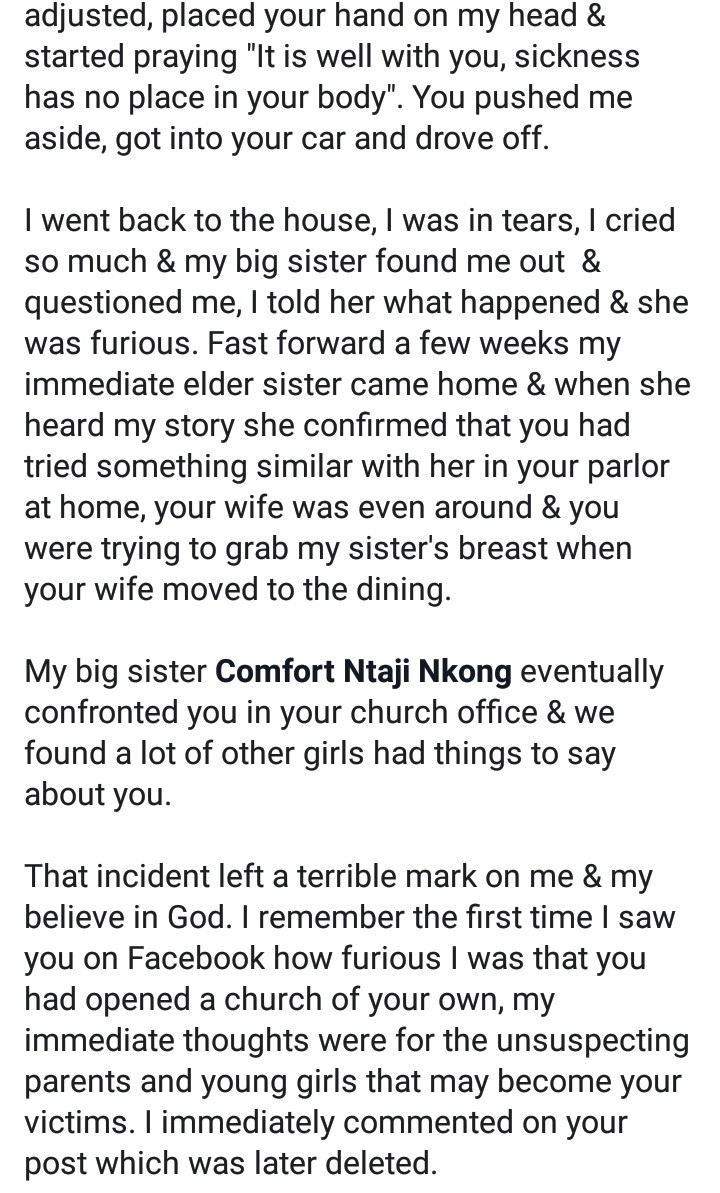 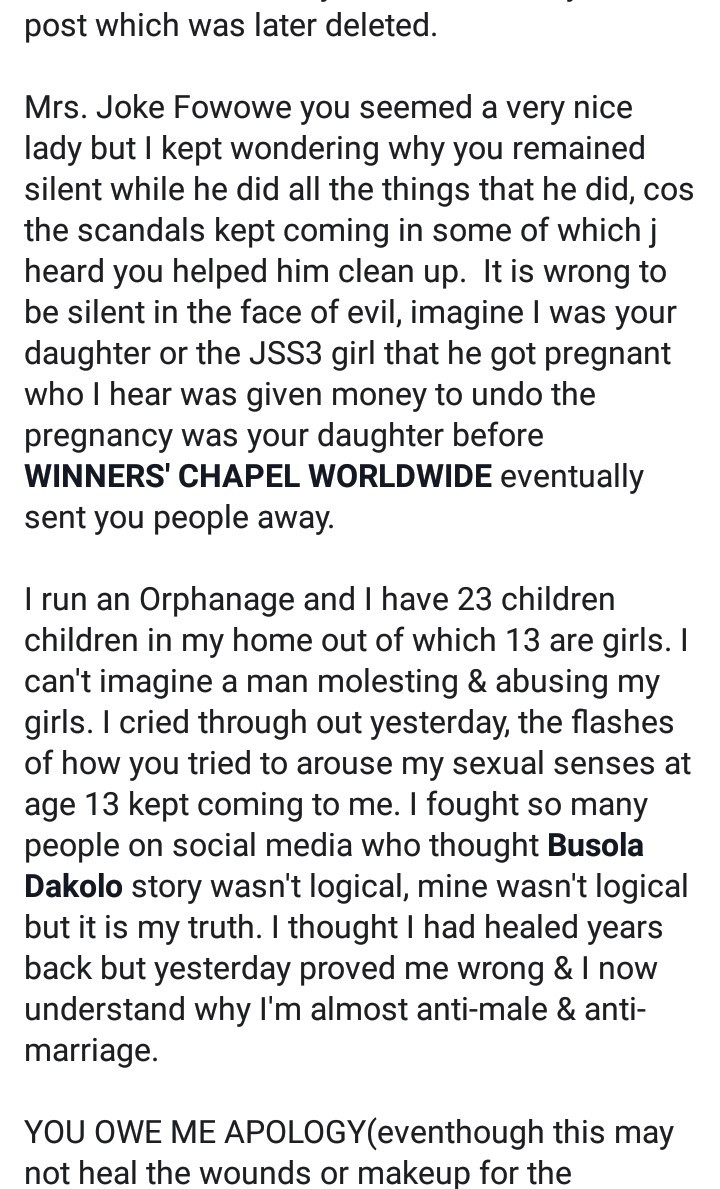 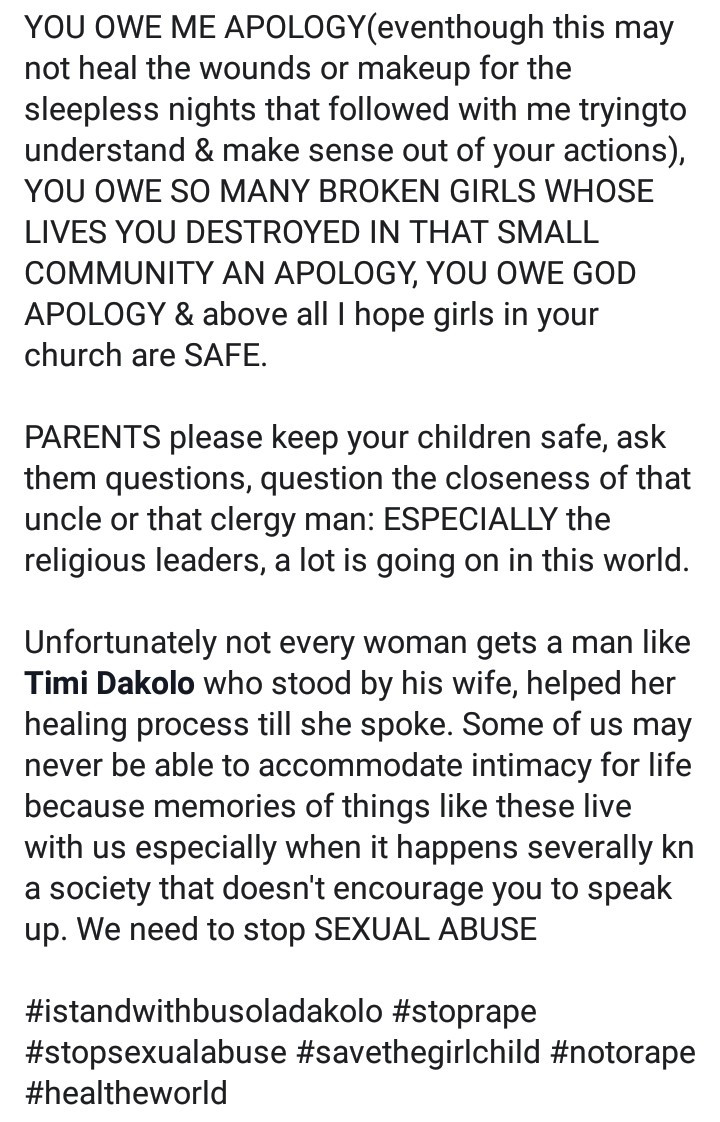