Renowned Nigerian author, Chika Unigwe has narrated how she was almost raped when she was a freshman in UNN. She went on to recall other incidents where she was sexually assaulted by grown men, including by their family doctor and a cousin.

Unigwe, who is a member of the Organising Team at TEDxEuston, wrote on Facebook:

My freshman year at UNN, a guy almost raped me.He threatened to bring out a gun, he slapped me, he said I could scream as loudly as I wanted , no one would come to help me (apparently, unbeknowst to me, he had a reputation for being a rapist so “whoever went to his room was asking for it.” )

Years before then, I was still in high school, our family physcian whom I called uncle , touched me up on his examination table.

Years before then, I was in elementary school then, my mother’s cousin cornered me in the kitchen and squeezed my non-existent boobs.

The UNN guy, let’s call him EE, is now some sort of ‘evangelist’ in Lagos; the physician is still practicing, somewhere in Europe; my mother’s cousin is dead.

It’s been many years , but I’ve never forgotten. I also never told my mother until many , many years after the fact. People saying they don’t believe Busola Dakolo because she’s only now telling her story should take several seats behind. There are reasons why sexual assault victims in our society keep quiet.

For one, ours is one where the culture of victim blaming/shaming is entrenched. To be raped is to become ‘damaged goods.’ EE raped with impunity because he knew the consequences, socially (and culturally), were worse for his victims than it would be for him. Victims found thesmselves in the uncomfortable position of protecting him so they could protect themselves. No one really expected justice from the authorities (school or police) in any case.

Had he succeeded in raping me, I’d have told my brother (only so that my brother could organize to have him beaten up).Even if I had had the courage to walk around campus with the scarlet letter on my forehead, the shame we force rape victims to carry, I would have thought of reporting him to authorities as an exercise in futility.

In the past days, I’ve read heartbreaking stories on my twitter TL: a father beating his daughter for “allowing herself to be raped”; a mother beating her daughter for reporting that she was touched inappropriately by an older relative etc. etc. etc.

I remember, a few yeats ago, reading of a man who forced his daughter’s rapist to marry her to “wipe away the shame.” ): ):

Years ago, I took a break from Osuofia after I watched ‘Osuofia Speaks French’ where the character marries his rape victim (by whom he has a son), and her parents and friends, happy for her , tell her she’s no longer a ‘fallen woman’ and “Now, your son is no longer a bastard.”

That has long been the dynamics of rape in our society: the power to give and to rehabilitate rests with the criminal.

However,things seem to be changing. It’s been heartening to hear stories of parents who’ve acted like they should; to see that there seems to be a movement determined to force offenders to answer for their crimes; that there is a new generation of Naija parents raising children to understand that there is no excuse for rape, and therefore the shame of the crime belongs ONLY to the criminal.

Soon, we will break down the wall of undeserved shame that walls victims in and emboldens offenders. The future is bright #MeToo 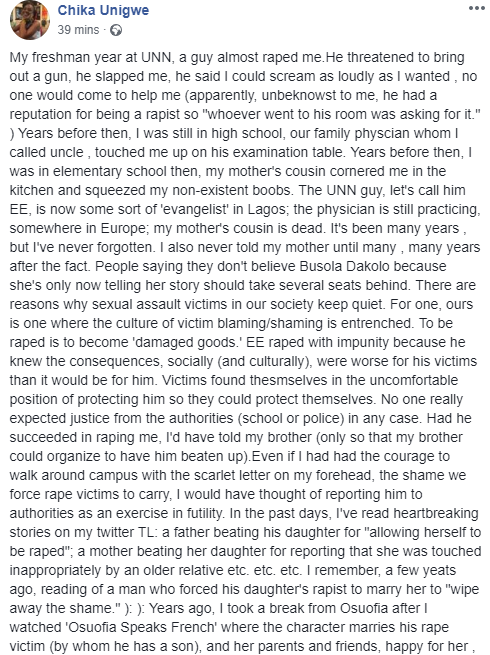 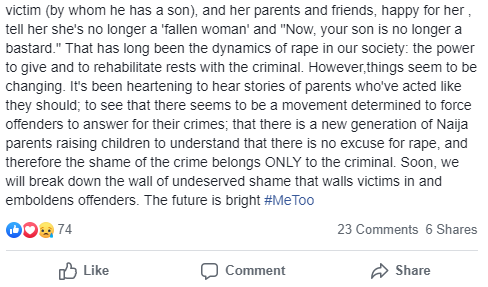