A woman was run over by her estranged husband as she tried to stop him driving away from court ahead of their divorce hearing. The couple had been rowing in the car park outside a government building where their case was due to be heard. But as the argument got heated, the man got back in his car and threatened to drive away. His wife tried to stop him by standing in front of his white SUV, but the man drives straight into her.  The incident is believed to have been captured by a staff member in the office of the Yongnian District Civil Affairs Bureau, in the city of Handan in northern China. 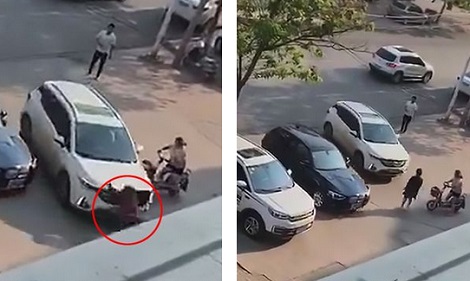 The couple, whose names have been withheld by the police, had showed up at the government office together in order to file for divorce on Friday. The Yongnian District Public Security Bureau confirmed in a statement on Sunday that the man and woman involved were indeed a married couple who were preparing to file for divorce at the office. The wife was taken to hospital for treatment and is not in any life-threatening condition. She has refused to allow police to conduct a formal evaluation of her condition which will be needed if the man is to be formally charged. Both husband and wife have requested that they be allowed to settle the matter among themselves, but the police say they are still carrying out their own investigation.

Music legend reported to police for groping a man in a hotel toilet
Former Egypt president Mohamed Morsi dies in court
Shocking Reveal! Former DG NIMASA Admits Stealing Funds, Says I Used It To Build My Hotel
Girl Makes Her Dad Wear Her Convocation Gown For Sending Her To School Despite Being A Security Guard (Photo)