British Prime Minister, Theresa May is “set to resign” after members of her own party joined calls for her to resign.

This comes after Commons Leader Andrea Leadsom left her Cabinet job in anger over Ms May’s Brexit plan. Andrea Leadsom resigned, saying she no longer believes the Government’s approach will deliver on the referendum result to leave the European Union. 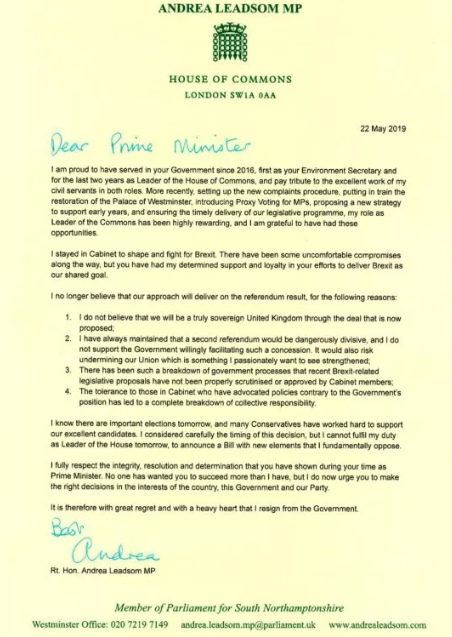 Yesterday, Ms May faced calls from her own party to scrap her new Brexit proposal as it faced near-certain humiliating defeat with dire consequences. She is understood to have “barricaded” herself in at Number 10, the official residence and office of the Prime Minister of the UK, as a growing number of Tories join the race for her job.

Former Tory leader Iain Duncan Smith said yesterday: “The sofa is up against the door, she’s not leaving.”

With Theresa May predicted to go by the end of the week, Conservatives are “queuing up” for May’s position in Downing Street. Boris Johnson leads the field for a leadership race.

Downing Street sources said it was possible that the PM could meet Foreign Secretary Jeremy Hunt on Thursday, her preferred choice to be her successor.

After the dramatic night in Westminster, the Prime Minister announced she will meet Sir Graham Brady, the representative of Tory backbench MPs, on Friday for a meeting which could seal her fate.

She has previously agreed to set out the timetable for the contest to replace her after a crunch vote on her Brexit deal, widely expected on June 7. That deadline appears to have been brought forward with the announcement she will meet Sir Graham, chairman of the backbench 1922 Committee, the day after polling day for the European elections, which are expected to be disastrous for the Conservatives.

Sir Graham told reporters: “I will be meeting with the Prime Minister on Friday following her campaigning in the European elections tomorrow and following that meeting I will be consulting with the 1922 executive.”

Graphic: Woman stabs her husband to death during a disagreement in Adamawa state
Tanzanian Newspaper Suspended For ‘Insulting President’
Drug lords' houses, and proceeds given to those affected by drug gang violence
Our quit notice to northerners, Yoruba stands – Niger Delta militants