On wednesday, more than 1,000 guns were found in a home in the upscale Los Angeles neighborhood of Holmby Hills, but authorities have said there was no indication they were used in crimes.

“At this time, there is no indication they were, but that could change as the investigation continues,” Ginger Colbrun, spokeswoman for the Bureau of Alcohol, Tobacco, Firearms and Explosives, said.

The property looked like “a hoarder’s house” and it took 30 law enforcement officers more than 15 hours to clear the house and remove all the weapons. Police arrested Girard Saenz, 57, at the house over allegations of violating California’s law regarding assault weapons and .50 Browning Machine Gun rifles, Los Angeles police Lt. Chris Ramirez said

Man Desperate For A Son Sells His 10-Day-Old Daughter To Strangers For £4,500 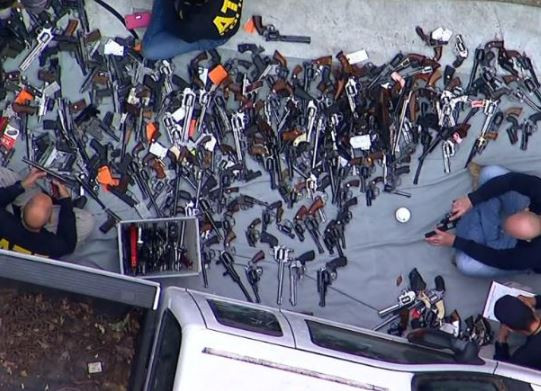 The law prohibits the manufacture, distribution, transportation, importation and sale of any assault rifle or .50 BMG rifles, except in specific circumstances, according to the California Legislature. Saenz posted $50,000 bail and was released on Thursday morning.

Back In 2015, Los Angeles police seized 1,200 guns, seven tons of ammunition and $230,000 in cash from a home. The owner had died of natural causes and was found in his SUV. At that time it was considered one of the largest seizures of weapons from one home, Los Angeles police said.