U.S. President, Donald Trump has declared that the Islamic State of Iraq and Syria (ISIS) will be eliminated from its last territory in Syria today.

Trump, who spoke at the White House, announced that the last of the Islamic State’s territory in Syria was currently being liberated by US-backed forces and that the situation would be resolved “by tonight.’’

While holding maps of ISIS’ territory in Iraq and Syria before and after his election, Trump pointed to a very small portion of the map that was currently being held by the terrorist group. The U.S. leader declared that by the end of Thursday, “the mission will be complete”.

“I brought this out for you because this is a map of everything in the red, this was on election night in 2016. Everything red is ISIS. When I took over, it was a mess.

IGP Reveals How Kidnapping Can End In Nigeria

Trump later showed off the maps on his Twitter handle comparing the territory ISIS seized before his election in 2016, and the small portion the terrorist group now occupied. “ISIS Caliphate two years ago in red vs. ISIS Caliphate TODAY. (Was even worse in November 2016 before I took office)”, Mr Trump tweeted. 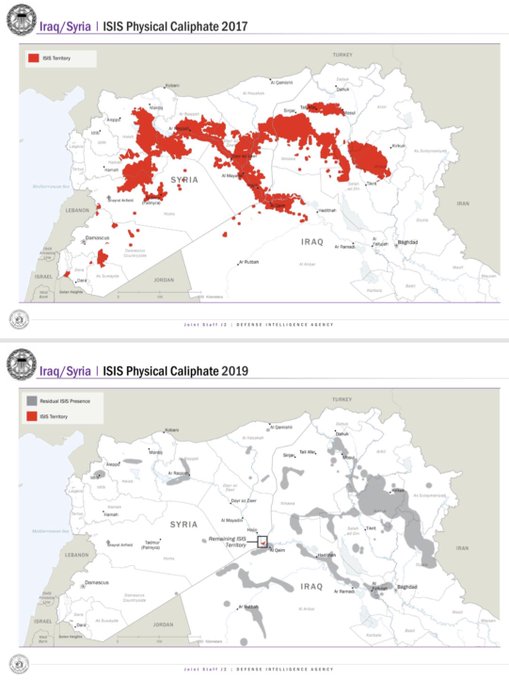 Lebanon Holds First Election In A Decade
Fresh prophecy about how Nigeria will break up in 2043: Primate Elijah Babatunde Ayodele
See the face of Manchester Arena bomber, Salman Abedi
Russia to US:”Our “Father of all bombs” is badder than your “Mother of all bombs”