A far-right Australian lawmaker who blamed the terrorist attack at two mosques on immigration policies that “allowed Muslim fanatics to migrate to New Zealand in the first place,” literally had egg on his face Saturday.

Senator Fraser Anning,who is no stranger to controversy, was left with raw egg dripping down his back and the front of his shirt after a teenager raised his phone with one hand and, with the other, smashed an egg on the side of the politician’s head at a Melbourne news conference.

Anning, in footage that went viral, was seen punching the boy in the face and then taking another swing before the two were separated and the teenager was tackled to the ground. 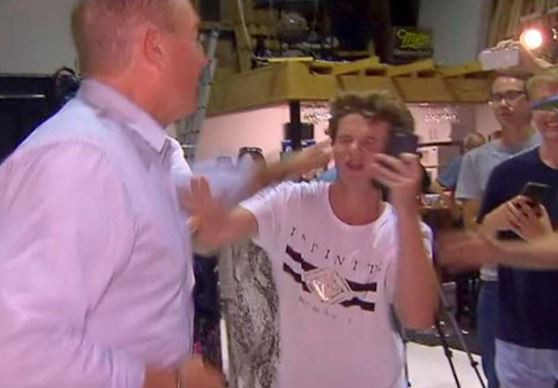 The encounter occurred a day after the massacre at two New Zealand mosques left at least 49 people dead and dozens injured.

The same day, the lawmaker said, “this kind of violent vigilantism highlights the growing fear within our community, both in Australia and New Zealand, of the increasing Muslim presence.”

Anning said he opposed violence and condemned the gunman’s actions but added, “The real cause of bloodshed on New Zealand streets today is the immigration program, which allowed Muslim fanatics to migrate to New Zealand in the first place.”