Actor, Jussie Smollett’s character on Empire will be removed from the final two episodes of this season following his arrest on charges that he staged a racist, anti-gay attack on himself last month in downtown Chicago.

Producers of the Fox TV show made the announcement today barely 24-hours after Smollett turned himself in to police, appeared in court on a felony charge of disorderly conduct for allegedly filing a false police report, and left jail after posting bond.

“While these allegations are very disturbing, we are placing our trust in the legal system as the process plays. We are also aware of the effects of this process on the cast and crew members who work on our show and to avoid further disruption on set, we have decided to remove the role of `Jamal’ from the final two episodes of the season” Empire executive producers Lee Daniels, Danny Strong, Brett Mahoney, Brian Grazer, Sanaa Hamri, Francie Calfo and Dennis Hammer said in a written statement.

The series, currently on a mid-season break, returns in the US on March 13th with nine episodes. The last two episodes of the fifth season were still being made when Smollett was charged. 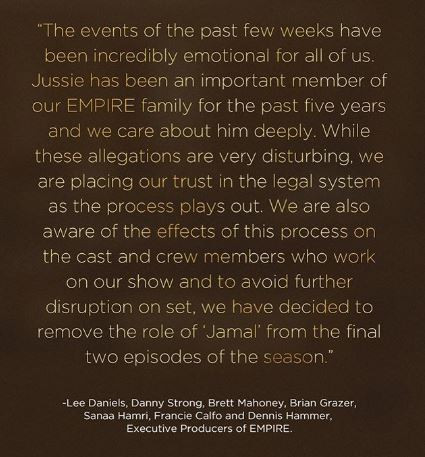 One Dead In Attack On Tambuwal’s Motorcade
Adams Oshiomhole says he has pictures of Obasanjo using policemen to snatch ballot boxes
Photos: Prophet In Trouble After Making Family Dig Up Dead Man Only For Him To Fail To Resurrect Him
"Super Eagles Were Very Good, This Match Was The Hardest" – Riyad Mahrez