close menu
The younger brother of a popular Zamfara blogger, Shafaatu M Bala, was kidnapped on his way from Tsafe to Gusau, Zamfara state. According to reports, the kidnappers are demanding N15 million ransom to release the young man.
Read the post by a concerned Facebook user below:

“Jibril M Bala, a Junior brother to Shafaatu M Bala a popular Zamfara lady blogger was kidnapped on Friday on his way from Tsafe to Gusau Zamfara state, and his captors demanded 15 millions for as ransom.
From the audio tape conversation between the kidnappers and the only sister to Jibril Shafaatu she sorrowfully shed tears bagging the captors to collect one million and release the boy but they insist on 15 millions.
Wallahi Shafaatu has no hundred thousand, she’s junior cadre civil servant, she has no way to produce 15 millions. Let’s help them Don Allah
The spate of incessant killings and kidnappings is on the rise in Zamfara State, it is now a daily occurrence in many parts of the state, people are being abducted in broad daylight, bandits are audaciously enforcing taxes on villagers, IDPs are everywhere.
What can we do to help Jibril rescued.
We pray for Allah to reunite Jibril and all people in captivity to their families.” 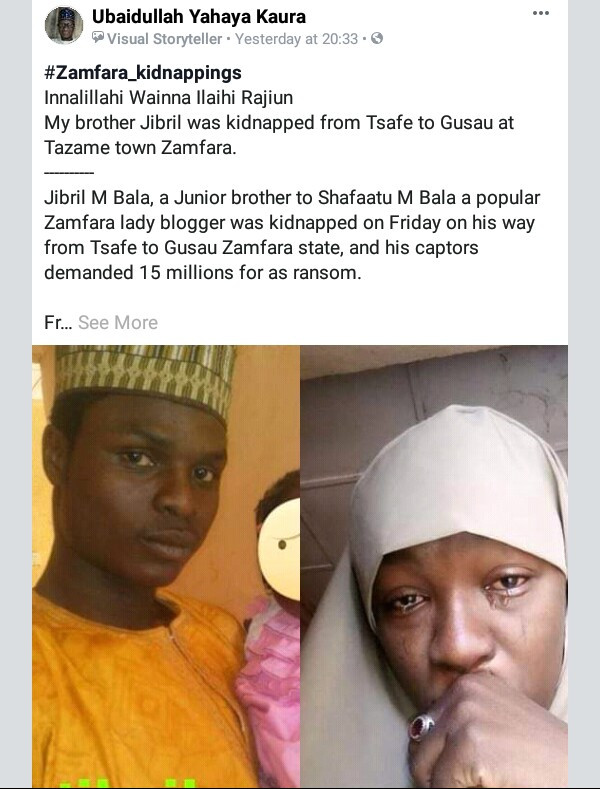 5 people die after two army helicopters collide in France
Teacher to pay for tying disabled student in classroom, taping her mouth, taking a photo and sending to her mother
Categories: News