The Coalition of United Political Parties (CUPP) on Thursday said it has initiated Legal Action at Federal High Court to stop President Buhari from participating in 2019 election over what it described as “his Mental and Physical instability.”

According to the statement, “the Opposition political parties have carefully studied President Muhammadu Buhari over the months, especially since his return to the country after the sickness that took him out of Nigeria for the better part of 2017, and have come to the conclusion that he is no longer mentally and physically fit to lead a nation like ours in this century.” 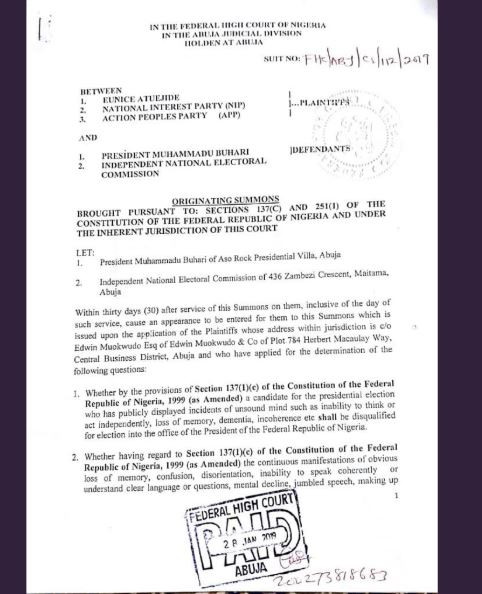 The CUPP went further to provide examples to prove that the President Buhari is not truly fit to carry on with the office and functions of a president.

The statement reads in part:

“A few recent examples will be necessary here. One, you will recall how the President almost fall flat on his face during his recent campaign visit to Lokoja, Kogi State. Despite that he flew into the town, the few steps the President took at the rally venue had a huge toll on him. When he was invited to the podium, he lost balance immediately he stood up. It was the timely intervention of his aides who were already keeping their eyes on him since they know his health status, that saved us what would have resulted into a national disaster.

A few days after the Kogi episode, a similar scenario played out at the venue of his campaign rally in Kaduna. After he trekked a short distance to his seat, President Buhari was clearly exhausted. He was still managing to wave to those who were already at the venue when he suddenly sunk heavily into his seat even at a time the national anthem was being recited. The seat was his saving grace on that occasion.

Still on his uninspiring ongoing re-election campaigns, we are all witnesses to the embarrassment President Buhari subjected the country to in Warri, Delta State. When it was time for him to present his party’s flag to the State governorship candidate, Great Ogboru, the President embarrassingly referred to the man as “the presidential candidate.” After those who surrounded him corrected him, President Buhari again referred to Ogboru as “the senatorial candidate.” Again, he was corrected and he came up with the most embarrassing one by saying the man is the “governortorial” candidate. The President must be using a different dictionary because the word “governortorial” does not exist in any good dictionary.

"Never, ever threaten the US again or you will suffer consequences.." - Trump issues stern warning to Iranian President

You will also recall when he featured on a town hall meeting called “The Candidates” which was broadcast live on the Nigerian Television Authority. Among his various goofs at that event was when he was asked why he is seeking second term and he said since the party leaders chose him, he had to run.

All those who watched that programme will recall how Vice-President Yemi Osinbajo who featured with him struggled very hard to come to his rescue whenever he goes off the track which he did many times. This probably explained why his men did not allow him to participate in the presidential debate organised by the Nigeria Election Debate Group and the Broadcasting Organisation of Nigeria.

We have come to the conclusion that re-electing Buhari will only empower members of the cabal that his wife admitted has hijacked his Presidency, to rule us for another four years from the dark.

In order to save this great nation the disaster that will follow if President Buhari is in a rare happenstance re-elected, we the opposition political parties have therefore filed litigation in court seeking to declare him unfit to contest for 2019 election because of his mental instability.

We are also seeking from the Court an Order disqualifying President Muhammadu Buhari from contesting the election to the office President of the Federal Republic of Nigeria, and an injunction restraining INEC from recognizing his candidacy. Nigerians will also be glad to know that to prove that we are on the right path, we are also asking the court to grant an order directing President Buhari to make public the results of the medical examination which we ask that he be subjected to so that no citizen will be in doubt that we are saving the country from calamity by taking these steps.

Stopping President Muhammadu Buhari from foisting himself on Nigeria come February 16th by every legitimate means is a patriotic service to Nigeria.

19 Dead After Gold Mine Collapses In Mali
Categories: News

FBI Director James Comey Is Fired By Trump
Jealous Husband Cuts Off Wife’s Hands’ After Accusing Her Of Having An Affair
Russia 2018 - Stranded Nigerians Storm Embassy Begging To Return Home
Photo: Worker who gets hit by bus, first asks for phone to call his boss to say he’ll be late