Pastor John Gray teared up during a Facebook Live video this week as he defended buying a Lamborghini for his wife.

Gray said the luxury sports utility vehicle was bought with “not a nickel, not a penny,” from Relentless Church in Greenville.

Gray said he has saved and planned his money for years, drawing on a variety of sources including his second book deal and the fourth season of his OWN channel reality show.

The Lamborghini itself, starting at $200,000, was given to his wife Aventer as a symbol of his love for her, Gray said. The couple celebrated their eighth wedding anniversary Saturday and during the celebration, he gave her the keys.

Gray said it’s been a long road in 8 years, from a honeymoon where they were so broke they had to share a shrimp cocktail to being able to afford an expensive gift that his wife loved. 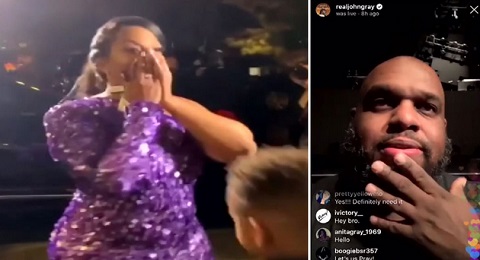 “My wife has pushed for my dreams and my vision and she has toiled with a man who is still trying to find himself,” Gray said. “That carries a weight. I wanted to honor her for how she’s covered me.”

Gray said the Lamborghini wasn’t bought by a pastor, it was bought by a husband who happens to be a pastor and did not involve money from Relentless Church.

Partially clothed woman dies after being dragged off American Airlines flight
Photos: Muslims, Traditionalists Clash In Ekiti Over The ‘God’ To Worship At A Particular Time
The most dangerous sex styles revealed
Fomer U.S President, Barack Obama jokes that he’s grateful Michelle stayed with him after his presidency was over