With one tweet, President Trump praised his current secretary of state, Mike Pompeo and dragged the heck out of his predecessor, Rex Tillerson, calling him dumb and lazy.

In the president’s words, ‘Mike Pompeo is doing a great job, I am very proud of him. His predecessor, Rex Tillerson, didn’t have the mental capacity needed. He was dumb as a rock and I couldn’t get rid of him fast enough. He was lazy as hell. Now it is a whole new ballgame, great spirit at State’.

Rex Tillerson was fired by President Trump back in March 2018. 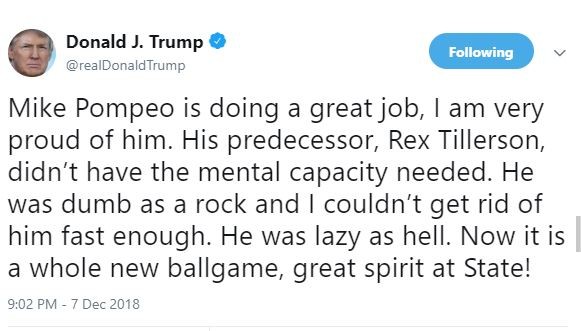