The death of Leicester City owner Vichai Srivaddhanaprabha and four others in a helicopter crash has stunned the world of football.

He has been hailed as a “passionate” man who was “generous in the extreme” as tributes poured in following confirmation he was among five people killed when his helicopter crashed.

The tragedy unfolded after the Foxes 1-1 draw with West Ham on Saturday evening with the other four passengers named as Nursara Suknamai and Kaveporn Punpare, who were members of Mr Srivaddhanaprabha’s staff, as well as pilot Eric Swaffer and passenger Izabela Roza Lechowicz.

The club described their chairman as “a man of kindness, of generosity” and said “Leicester City was a family under his leadership” while the club’s players, many of whom were Premier League winners in 2015, shared their grief.

Fans from across the country continue to stream into Leicester’s ground this morning to pay their respects, including the billionaire’s son, Top and wife. 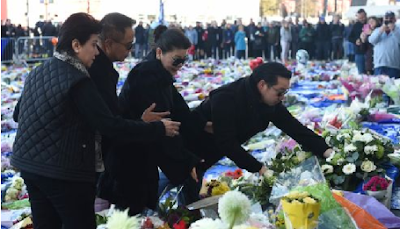