Senator Ben Bruce has called for the termination of appointment of the Minister of Health, Isaac Adewole, over his recent comment on Nigeria medical graduates.

Adewole was recently accosted by journalists who asked him what the government was doing to provide more places of residency where medical doctors trained in Nigeria, can practice.

Adewole in his response says not everyone who graduates as a medical doctor would practice. According to him, some would end up becoming farmers or tailors like his personal fashion designer.

”When both President Buhari and his son needed urgent medical care, they went to Europe. Yet the minister of health tells medical students they can’t all be specialist, saying they can be farmers and politicians. If I were the President, that man would not have a job the next day!”. 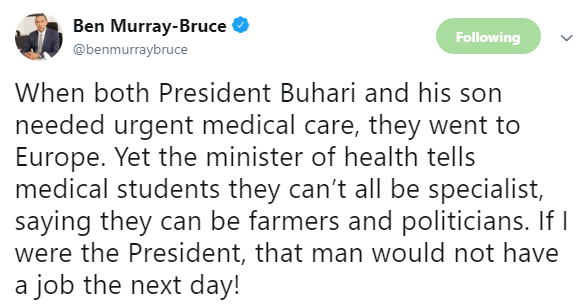 Watch a clip of the Minister making the comment below.

The Florida school shooting, the 18th school shooting of the year 2018 & one of the deadliest in US history
Zimbabwe: Soldier Kills Wife After Discovering Two Of His Children Were Fathered By His Superior
Supreme Court Restores Trump’s Travel Ban
See the face of Manchester Arena bomber, Salman Abedi