The distressing moment a tearful poverty-stricken mum hands over her newborn baby forever for just £34  (N16,199.19)  to a  middle-aged woman who longed to raise one more child, was captured on camera.

The 25-year-old distraught mother Inna Petrova was seen in a CCTV video clutching her nine-day-old daughter as she walks around at Omsk airport in Russia.

Inna, an unemployed painter at one point turns her back on Natalia Zhdanova, 43, who flew 1,970 miles from St Petersburg to collect the baby. As she kisses her daughter for the last time she handed over the child, kept warm in a bright pink wrap to Natalia, who then used a fake birth certificate which listed the baby as hers to show airport security before flying back to her home city with the child. 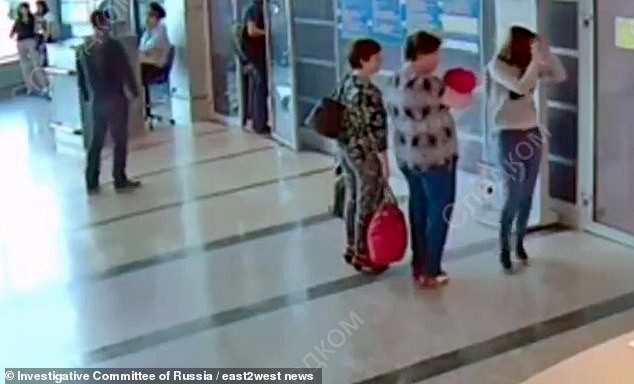 According to Investigators, Zhdanova was ‘desperate’ to raise another child after her adult son left home.

She posted an online advertisement saying: ‘Hi everyone! My husband and I would very much like to get a baby aged 0 to 3 months. All the documents for adoption are ready. Please send a private message for details. Girls, darlings, please help.’

The Investigative Committee said Petrova who at the time was pregnant after a short relationship with a man she met at a local cafe – replied: ‘Hello, I would like my daughter to be adopted. Please do so, I am not able to raise her, no chance’.

After the women agreed, Zhdanova sent a payment of 3,000 roubles – just £34 to Petrova ahead of the child’s birth.

But during a Police investigation, Petrova said she lived with her mother and sister in a cramped apartment and they were furious when she became pregnant.

According to her, they tried persuading her not to have the child.

5 Amazing Benefits Of Taking A Cold Shower Every Morning

Omsk prosecutor Vasily Gumenyuk said: ‘During our interrogation, the biological mother of the baby explained that she lived in a rented apartment with her mother and sister.

‘Both were strongly against the baby and put strong psychological pressure on the future mother.

‘The young woman failed to get a job, and she was not married to the father of her baby.

‘He knew about her pregnancy but did not plan to support her.

‘She decided to give away the baby to the teacher from St Petersburg.’

The women have now been arrested and could each face up to ten years in jail.