Tennis Champion, Serena Williams had an outburst with umpire Carlos Ramos which overshadowed her US Open final and saw her lost to Japan’s Naomi Osaka.

The 20-year-old became the first ever Japanese Major singles champion after winning 6-2, 6-4 but the crucial game had series of chaos between umpire Carlos Ramos and Serena Williams at the Arthur Ashe Stadium.

According to reports, trouble started when her coach was called for giving hand signals illegally in the first set, and then spiralled when she slammed her racket into the ground when broken back for 3-2 in the second, after which she was given a point penalty. 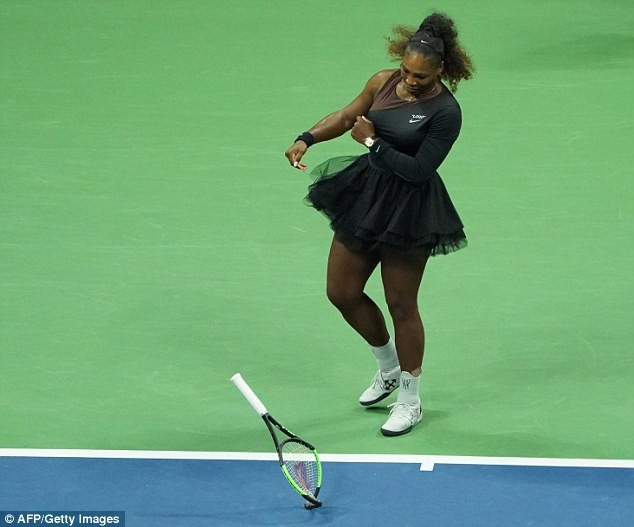 She repeatedly insulted the umpire, calling him a liar and a thief and demanding an apology. He duly docked her a game after the third code violation, leaving her at 3-5, from which she could not recover.

All this overshadowed her US Open final and saw Naomi Osaka claim her first ever grand slam.

After being penalised for throwing her racket early in the second set:

‘This is unbelievable. Every team I play here I have problems.

After being broken to trail 4-3 in the second set:

‘I never got coaching. I explained that to you and for you to attack my character then something is wrong. You’re attacking my character. Yes you are. You owe me an apology.

‘You will never, ever, ever be on another court of mine as long as you live. You are the liar. When are you going to give me my apology? You owe me an apology.

After being docked a game:

‘There are a lot of men out here that have said a lot of things and because they are a man it doesn’t matter. This is unbelievable. No I don’t know the risk because if I say a simple thing, a thief, because he stole a point from me.

‘I get the rules but I’m just saying it’s not right. It happens to me at this tournament every single year and it’s not fair. That’s all I have to say.’

‘I can’t sit here and say I wouldn’t say he’s a thief, because I thought he took a game from me.

‘But I’ve seen other men call other umpires several things. I’m here fighting for women’s rights and for women’s equality and for all kinds of stuff. For me to say ‘thief’ and for him to take a game, it made me feel like it was a sexist remark. He’s never taken a game from a man because they said “thief”. It blows my mind.

‘I just feel like the fact that I have to go through this is just an example for the next person that has emotions, and that wants to express themselves, and wants to be a strong woman.

‘They’re going to be allowed to do that because of today. Maybe it didn’t work out for me, but it’s going to work out for the next person.’