A Kim Jong-un impersonator claims looking like the tubby dictator has helped him bed more than 100 women.

He said: “It definitely makes me popular all the girls want photos. I’ve had dozens of women.

“It’s not stopped since I started five years ago.

“I joke that I can make them my mistress number two, three and four.”

He gave 35-year-old Kim the nickname Rocket Man when they were rowing about nuclear weapons.

Howard who does not reveal his real surname said: “We’re impersonators for the two biggest idiots and madmen.

People love it when we start kissing and imitating sex.

“In Singapore they went nuts for it.

In restaurants we get free drinks and food.

We also make money endorsing products such as sunglasses and fried chicken.”

Howard gets paid up to £10,000 for each appearance as North Korea’s “Dear Leader” and says he has met scores of celebrities.

In 2015, he sneaked into the Grammys in Los Angeles and surprised pop star Katy Perry, 33.

He asked her: “Do you recognise me?”

She replied: “I was surprised they let you into the country.” 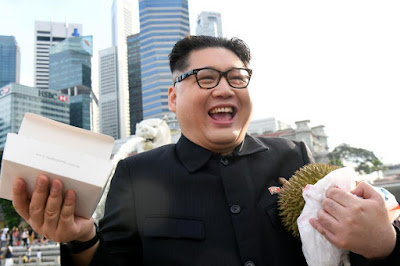 Model ‘forced to strip in front of male prisoners’ after she was arrested
Categories: News