A 23-year-old hairdresser, Opeyemi Adamson, has allegedly killed her neighbour, Taiwo Olowookere, at their house in the Meiran area of Lagos State.

PUNCH Metro gathered that 28-year-old Taiwo lived with the suspect’s mother-in-law, who accommodated her after she separated from her husband. 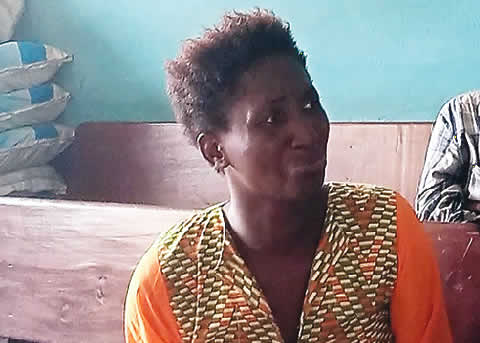 Opeyemi, who lived with her husband, stayed in the same compound with the victim.

The duo were said to have nursed animosity towards each other until Friday, August 24 when things took a tragic turn.

The deceased had reportedly complained about Opeyemi’s eight-months-old baby, saying the child’s noise disturbed her.

The suspect reportedly insulted her, which led to exchange of words.

Taiwo, who reported the incident to the police before her death, said her assailant became angry after she (Taiwo) called her shaku-shaku woman (useless person), adding that she stabbed her in the neck.

“About three months ago, I had a problem with my husband. The woman I was staying with was her (Opeyemi) mother-in-law.

“On a particular day, my child was ill and I took him to a hospital. When I returned, I greeted her, but she refused to respond. That was when our misunderstanding started.
“Around 7am on August 24, I went to bath my child. While doing that, her child started making a noise. I called her that her child was disturbing me, but she abused me.

“She started cursing me and I called her shaku-shaku woman. She asked why I would call her such a name. She said she would show me what a shaku-shaku woman was like. She went inside and brought out a knife which she used to stab me in the neck.”

PUNCH Metro gathered that the victim reported the case at the Meiran Police Station and Opeyemi was arrested.

Taiwo was taken to a local medical centre where she was treated until her death.

Opeyemi, who spoke to our correspondent, however, blamed the victim’s husband for her death, while she also accused Taiwo of jealousy.

“Her husband always beat her up and that was why my mother-in-law assisted her. When she arrived at our house, she was always cursing me. She always said I was happy because I had a good husband, while she had no good matrimonial home and that she would deal with me.

“The knife belonged to her; I stabbed her in self defence. Her husband was buying her all sorts of things while she was in the hospital. When she died, her husband came to dump her corpse in our house and fled.”

The deceased’s husband, Sunday Olowookere, a factory worker, told our correspondent he had reconciled with his wife when the incident happened.

He said Opeyemi had problem with his wife after the latter stopped keeping money with her.

“My wife and I had a misunderstanding over her attitude. She became annoyed and left for the house of a co-trader. A SARS officer intervened and I was asked to sign an undertaking that I would never lay hands on her again, which I did.

“We both made statements at a police station and I thought it was over, but she said she was not ready to follow me home; she said she would join me later.“My wife could be abusive, but she would never fight anyone. The woman that stabbed her is a cult member. She started having issues with my wife after my wife stopped giving her money for safekeeping.

“I was at work late at night when I was called that my wife had been stabbed. It was the following day that I got there. She was taken to a local medical centre where her injuries festered and her neck became swollen. We were asked to conduct an X-ray for her. I was taking her to a general hospital when she gave up the ghost.”

Opeyemi was arraigned before an Ebute-Meta Chief Magistrates’ Court on one count of murder.

Oladele asked the court to remand the suspect in prison pending legal advice from the Directorate of Public Prosecutions.

See what Northern youths are about to do to Igbos who don’t leave their region within 3 months
Categories: News