About two million pilgrims have made the symbolic stoning of the devil in Mecca, the last rites of the annual pilgrimage.

The ceremony heralds the start of the Eid Al Adha feast, according to Gulf News

Muslims on the annual hajj pilgrimage, one of the five pillars of Islam, made their way across the Mina valley of the western Saudi Arabian Makkah province, many carrying pebbles in plastic bottles.

Pilgrims clad in white threw seven stones each at a pillar symbolising satan, shouting “Allahu akbar” (“God is greatest”) under the watchful eyes of security forces.

Large fans sprayed water over the crowd as temperatures climbed to 44 degrees Celsius.

“Thank God it hasn’t been too crowded this year. There hasn’t been a big rush,” said Mohammea Osman, 27, who regularly attends hajj.

Mina was the site of a 2015 stampede which saw more than 2,300 pilgrims crushed or suffocated to death.

Authorities have since reinforced more stringent safety and security measures.

“We are under God’s protection,” said May Khalifa, a 37-year-old Egyptian Muslim living in Riyadh.

“Despite the exhaustion, I’m enjoying my first hajj,” she said, lifting her small bag of stones. 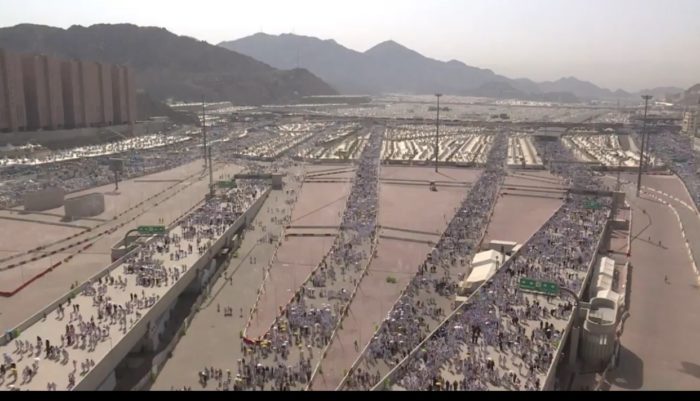 Fire engulfs 27-storey building in West London as trapped residents screamed for help
Trump claims ISIS has been defeated in Syria, orders US troops home
Stripper and boyfriend kill club manager and guard for saying she couldn’t dance
US Senate vote in favor of advancing Brett Kavanaugh to the Supreme Court