A lesbian activist campaigning against the stigma around menstruation was arrested and thrown in prison before being asked degrading questions about her personal life in court, human rights groups claim.

Campaigners voiced their horror after Zhanar Sekerbayeva was detained by police in Kazakhstan and convicted of “minor hooliganism”.

When she appeared in front of a judge, LGBTI campaigner Ms Sekerayeva, who is a founding member of feminist group Feminita was asked a series of questions including whether she was pregnant, and whether she had children.

Ms Sekerayeva, from Almaty in Kazakhstan, was detained after taking part in an awareness photo shoot, during which she held a cartoon of a menstruating woman.

Feminita has claimed the country is “ashamed of women”.

Feminita claims the subject is regarded as “dirty”, and is stigmatised, stating that members including the defendant were confronted by “aggressive” men during their demonstration.

In a statement, the organisation said many felt “ashamed” of menstruation, and added: “Why is Kazakhstan ashamed of women?”

Kazakhstan’s authorities have been accused of demonstrating “intolerance” after her arrest on August 15.

In a statement Amnesty International wrote: “The judge asked Zhanar Sekerbayeva inappropriate questions about her private life such as ‘Are you married? Do you have any children? Are you pregnant?’ and interrogated her about the poster.”

Today she was ordered to pay a fine of 12,025 tenge – the equivalent of N10,000 in a court hearing after being found guilty.

Ms Sekerbayeva said she was disappointed with the reaction pictures of her taking part in the demonstration provoked.

She wrote: “Without finding arguments, people begin to discuss our appearance, sexuality, font posters, drawings or recommend us how to behave.

“All this once again shows me and my sisters that we are on the right track, feminism in Kazakhstan is necessary and we will not remain silent.” 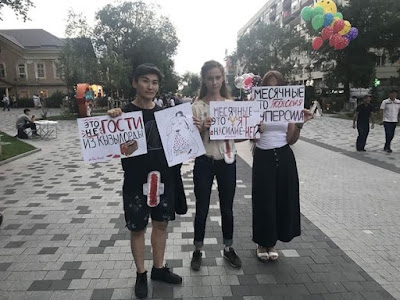 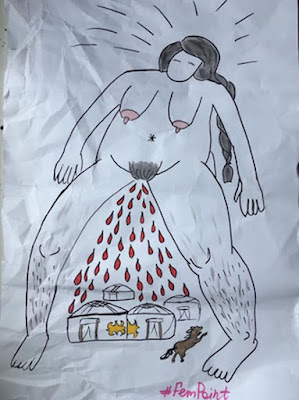 New Accuser Says R. Kelly Had S3x With Her When She Was 16
Container-Load Of Arms Found In Lagos Port
Here's The Most Dangerous Photo Ever
Wendy Williams Faints On Live TV