A shopping trip turned into a violent affair after a boyfriend caught another man looking at his girlfriend’s bum.

The angry boyfriend immediately lost his cool and confronted the smirking stranger, punching him so hard his hat fell off.

The couple had been visiting the SEA Wireless shop in Lincolnton, North Carolina, on August 8.

In footage filmed on the store’s CCTV camera, the pair can be seen chatting to a man behind the counter while a guy in a red jumper leans behind them.

Slouched over with his arms crossed, the customer appears to be looking at the woman’s bum in the clip.

It isn’t long before her boyfriend notices and turns around to square up to the complete stranger.

The man in red then straightens up to give a creepy smile and say ‘bye!’ before heading towards the door.

But he doesn’t get far, as the woman’s boyfriend follows him and furiously punches him in the head.

The customer is then left to pick his hat up off the floor with a stunned expression on his face.

He later awkwardly sidles out of the shop.

The woman’s reaction is mostly one of frustration and embarrassment at her boyfriend’s shocking behaviour.

She can be heard asking him ‘what is wrong with you’ before she demands he go and apologise.

She later asks the seemingly unbothered sales assistant not to call the police. 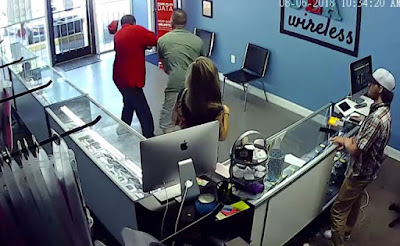 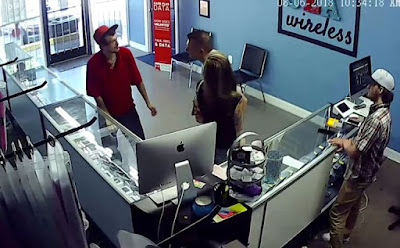 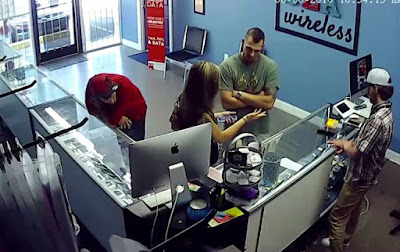 Cameroon Sets To Deport 4,000 Nigerian Refugees
We suspect sabotage in church fire incident –CAN
Heartbroken father prepares sick daughter for death by taking her to play in her own grave
#EndSARS: Presidency reacts to the killing of football fan, Kolade Johnson, by SARS officers