When you type the word ‘idiot’ into Google’s image search, guess what result comes up first?
Images of the US President, Donald Trump! Evil people, lol.

This is partly because the Green Day song American Idiot was used by protesters to soundtrack his trip to London.

Protesters, activists and Internet users are seeking to influence Google’s algorithm so that when the term ‘idiot’ is searched for, images of Trump pop up on Google.

How are they doing this? Thousands of people are believed to have uploaded images of Trump with ‘idiot’ as a tag and you know when that happens and you google ‘idiot’ it automatically brings up the image, hence Trump. 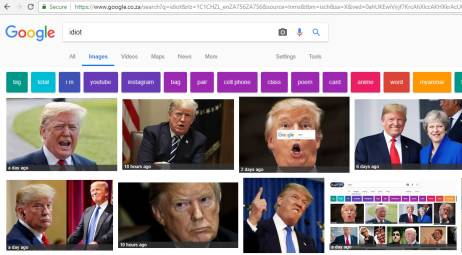