A former UK councillor, Stephen Searle, has been found guilty of murdering his wife in a disagreement over his affair with son’s girlfriend.

During the trial, the former Royal Marine Stephen Searle, 64, told jurors he put his hand round his wife, Anne Searle’s neck for 20-25 seconds after she stabbed him during an angry row at their £400,000 home in Stowmarket, Suffolk, reports Mirror UK.

On December 30 last year, Searle made a call to police telling them he had killed his 62-year-old wife, before she was found dead minutes later by responding emergency services.

He says he was acting in self-defence after a row erupted about an affair Searle had been having with his son’s long-term partner, Anastasia Pomiateeva, 39. 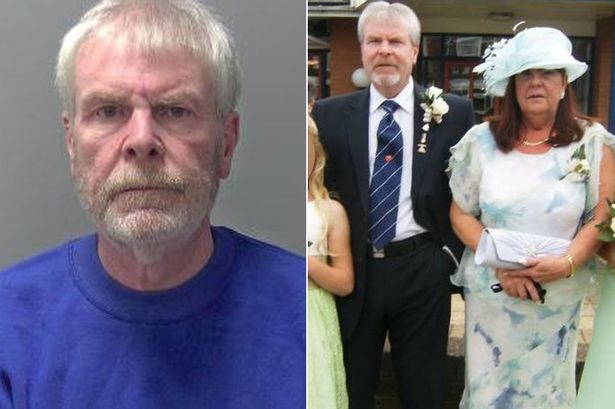 Prosecutor Andrew Jackson described how Searle began a sexual relationship with Ms Pomiateeva in April 2017, which was kept hidden from the rest of the family until it was discovered in June 2017.

Ipswich Crown Court heard how Searle and his wife of 45 years had been drinking heavily on the day of her death.

“I felt a stinging. I looked down and I saw a blade going backwards and forwards.

“It was in Anne’s hand. She was stabbing me. I tried to grab it and she pulled her arm away. There was a lot of noise, shouting and hollering, and I was pleading with her to give me the knife.

“We both stumbled. She fell backwards and I fell forwards. It was such madness.”

Why The Senate Called For Buhari’s Impeachment

After strangling her in what prosecutors say was a military-style choke hold, he later went back into the house and “realised things were certainly not right”.
He said: “

She was a sort of grey colour. I held her hand and she was just limp. She was not warm. I had seen bodies before and I thought, ‘She’s gone’.”

Jurors were earlier played the 999 call he made around an hour after the killing. Searle told the call handler: “I have just killed my wife… Suffocation…. bit of a bizarre situation.”

“Eventually she stopped struggling and I said thank ‘f’ for that. I said, ‘I am going to have a fag’. She didn’t reply.”

During the trial, Kelly Lawrence, who worked at a sushi food company with Anne, said her colleague found “sexy” texts sent by Searle and Anastasia.

Anne took screenshots of the exchanges and uploaded them on Facebook before later deleting her posts.

“I think she thought better of it being plastered all over the internet. I think in the end she confronted him about it.

“She told me she had spoken to him. He admitted to it and said it was with their daughter-in-law.”

“What WeWill Do With Recovered Assets” – President Buhari
Happy New Month! “May” This May Be To Us A Beautiful Friend
President Buhari Allegedly Rejected Bola Tinubu.
Man kills his 4 children, sister, self in Anambra