A homophobic Uber driver was caught Saturday on video kicking out a lesbian couple from his cab over the weekend because they shared a quick kiss in the back seat, according to the women.

“I was taking an Uber yesterday afternoon in Manhattan when my driver abruptly pulled over and kicked myself and my girlfriend out of the car,” one of the women, Alex Iovine, said. “He yelled at us for being disrespectful and inappropriate because we pecked on the lips.”

According to NY Daily News, the 26-year-old advertising technology consultant said it was about 5 p.m. when she and her girlfriend, Emma Pichl, 24, a senior recruiter, used the online livery service to hail a ride from Pig Beach in Gowanus where they were celebrating a friend’s birthday party to go to another friend’s birthday celebration in the East Village, Iovine said.

“We were sitting on opposite sides of the car,” she said. “We leaned in for a peck, and that’s what it was, a legit peck.”

Iovine said she’s aware of Uber’s rules against sex in the backseat and was adamant that the two did nothing more than a quick smooch.

That was too much for the driver, who pulled the car over on Canal St. just over the Manhattan Bridge.

“He said, ‘Get out of my car,’” Iovine said. “My girlfriend started laughing. She thought he was joking.”

The unidentified driver, wearing a wrinkled, ill-fitting undershirt and frosted sunglasses, can be seen on the recording opening the backdoor of the car after pulling over to force the couple out when he eyed them smooching.

“It’s illegal,” the driver said after Iovine asks him why he’s putting them out. “You can’t do this in the car. You aren’t allowed to do this.” 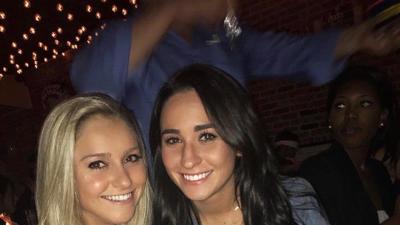 The women press him for a better explanation on why he cut short their trip through Manhattan.

“Why are we not allowed to kiss in an Uber?” Iovine asks.

“It’s disrespectful,” the livery driver says in the video.

“Nothing is illegal,” one of the women says. “It’s not illegal to kiss in New York.”

The grabbie cabbie reaches for one of the women’s phones to stop her from videotaping.Iovine said that she had sent a complaint to Uber directly after the incident, but the company had yet to respond.

“Getting this out there, getting a refund and getting an apology is all I want right now,” she said.

The company said they were looking into the disagreement.

“Uber does not tolerate any form of discrimination, and we have reached out to the rider regarding her experience,” Uber spokeswoman Susan Hendrick said in a statement. “We are investigating and will take appropriate action.”

Hendrick said that the driver had reported the incident as well.