A retired secondary school English teacher has corrected a letter she received from US president Donald Trump and sent it back to the White House.

Yvonne Mason, who lives in Atlanta and was a teacher for 17 years, said the letter would have barely passed and corrected its numerous grammatical errors.

This included 11 examples of incorrect capitalisation of words such as “president” and “state”.

She chose not to attach a grade to the corrected letter, which included Mr Trump’s signature, and posted back to the White House.

Ms Mason argued the note – which was a reply to a note she had written about the Valentine’s Day school shooting in Florida which left 17 dead – was “stylistically appalling”.

She acknowledged the letter was likely to have been penned by a staff member rather than the president himself.

“When you get letters from the highest level of government, you expect them to be at least mechanically correct,” she said.

The teacher, who taught English at Hughes Middle School and Mauldin High School in Greenville for almost two decades before retiring last year, compared the billionaire property developer’s letter to those sent by the state’s Republican Senator Lindsey Graham.

She said: “Lindsey Graham, or his people, writes exquisite letters. I give him credit for that. They are far more on-topic. I understand the nature of form letters, but Graham’s are written as if they’re addressing your particular concern.”
Ms Mason said the White House response did not address her request specifically.

In her original letter, she urged Mr Trump to individually meet with the families who lost loved ones at the Stoneman Douglas High School massacre. The world leader previously held a listening session with student survivors of mass shootings, their parents and teachers in the State Dining Room at the White House.

The Trump administration has been frequently mocked for its grammatical mistakes. The president has become famed for firing off rambling, inflammatory tweets – which include misspellings, typos and other linguistic errors – to his 52 million followers in the early hours. 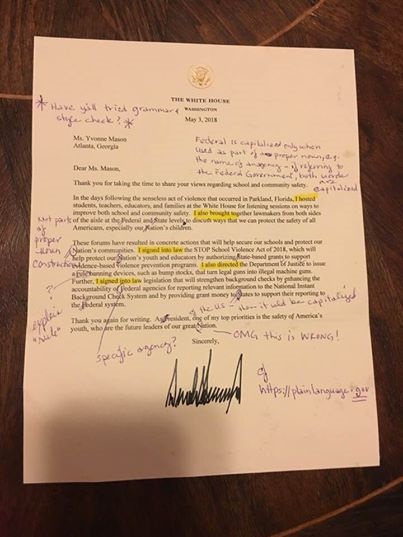