A teenager has been jailed on his 18th birthday for killing a 15-year-old boy in an alleged row over comments left on social media.

Michael Idehen, 18, who rapped about stabbing people on YouTube, was captured on CCTV plunging a knife into Kyron Webb’s chest in Moston, Manchester on October 17 last year.

During his trial he claimed Kyron had left derogatory comments on a video he posted on Snapchat and even threatened to stab him. 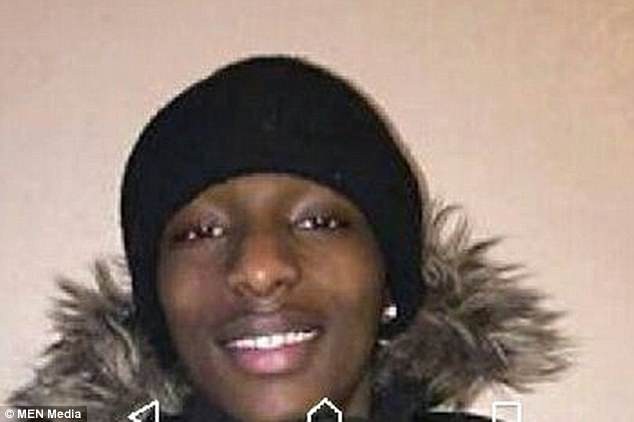 Michael, who turned 18 on Friday, May 11, 2018, was jailed on that same day. He was sentenced to a minimum of 15 years behind bars for the younger boy’s murder.

Michael had previously uploaded a video to YouTube that talked about “cheffing” a slang term for stabbing. The YouTube video called “No Gas” and posted by a group named “MB26” shows Micheal rapping about “trying to chef your friend”. The clip, which appeared online in August 2017, features a number of masked youths.

“He backed his shank [knife], he waived it around, but he didn’t do no cheffing,” the teenager raps.

Manchester Crown Court heard that Michael, who was 17 at the time of the attack and had previous convictions for knife possession and robbery, knew Kyron before it happened. Phone evidence suggested they had been in contact before.

A 17-year-old boy, who was 16 at the time of Kyron’s murder and who cannot be named for legal reasons, was also jailed for five years after pleading guilty to manslaughter.

The attack on Kyron was captured on CCTV. Prior to the fatal attack on October 17, Michael and his co-defendant who was sentenced to five years had taken a bus to Moston to meet up with another group for a “pre-arranged” meeting, prosecutor Nicholas Johnson QC said.

At around 6.45pm, student Kyron arrived in Moston Lane. Micheal walked over to speak to Kyron, who moved to Manchester from south London with his mother. The court heard Idehen’s co-defendant then arrived and moved towards Kyron in an “intimidating manner”.

Kyron and the then 16-year-old moved away for a short time, before Michael’s friend pulled a metal bar from his waistband. The three came back and stood together, and the 16-year-old then made two further “intimidating movements” towards Kyron.

Both defendants moved away, but around a minute later Michael returned to Kyron, who was leaning against a wall, and stabbed him through his heart.

The pair fled, leaving Kyron, who was collapsed on the floor, for dead. Kyron was rushed to hospital, where he died three days later. A knife was found in the bag he was carrying at the time of his death.

Both defendants were arrested the day Kyron died.

A victim impact statement by Kyron’s mother Rachel Webb, summarised by Mr Johnson, said: “She feels she has also died in many ways.”

Mr Johnson said members of Kyron’s family have had to undergo therapy.

A letter Micheal wrote to Kyron’s family was summarised in court. Mr Hayton said: “Whatever else happens to him [Micheal] he will never forgive himself for what he did.”