A university student took off her clothes in class for her presentation, after her professor said her clothes were “too short” for public speaking.

Letitia Chai, 18, livestreamed her strip protest on Facebook. She said she wanted to stand up “against oppressive beliefs and discrimination” and that is why she stripped down in front of her class at Cornell University in New York on Saturday. 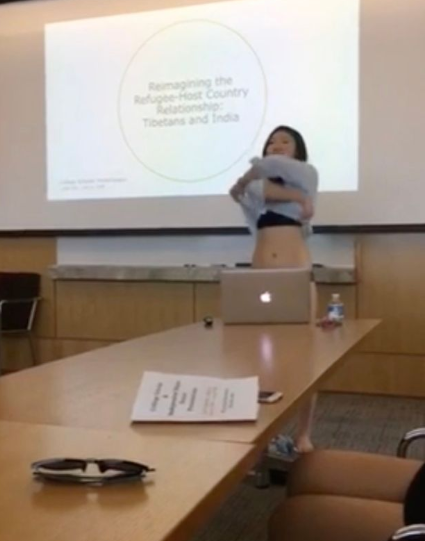 According to reports, Letitia clashed with professor Maggor on Wednesday as she prepared to present a draft of her thesis on rehabilitation for displaced people and refugees. The student, who was wearing a long-sleeve blue button-down shirt and denim cut-off shorts in class on Wednesday, claimed the “first thing” her professor said to her was “is that really what you want to wear?”

Stunned Letitia also claimed professor Maggor told her that her shorts were “too short” and that as a speaker she was making a “statement” through the clothes she was wearing.

The first thing that the professor said to me was ‘is that really what you would wear?’

She, a white woman, continued: ‘Your shorts are too short’.

The professor proceeded to tell me, in front of my whole class, that I was inviting the male gaze away from the content of my presentation and onto my body.

She said I was making a statement by wearing my outfit. I told her that I sure as hell wouldn’t change my statement to make her or anyone else feel more comfortable.

According to Letitia, the professor later asked her what her mother would think of her clothes after she left the room.

The university’s student newspaper, The Cornell Daily Sun, reported that 28 out of 44 people in the room to watch Letitia’s presentation removed their clothes as well in a show of support. Letitia said she was “floored” by support after she called for solidarity following a row with her professor.

However, most of the students who witnessed the clash defended professor Rebekah Maggor and accused Letitia of inaccurately reflecting the reason why her choice of clothing was questioned. Out of 14 students, 11 said Letitia’s comments did not accurately reflect events in the classroom.

The students issued a joint statement in which they said professor Maggor’s comment had “error in phrasing” but the thrust of her point was to note the “importance of professionalism in certain public speaking situations.”

The professor told the Cornell University student newspaper that she doesn’t tell her students what to wear or determines “appropriate dress”.

An email to The Cornell Sun from professor Maggor reads: “I do not tell my students what to wear, nor do I define for them what constitutes appropriate dress.

“I ask them to reflect for themselves and make their own decisions.”

Amaechi Opens Up On Purported Audio Recording Credited To Him
Angela Simmons’ baby daddy, Sutton Tennyson shot dead
COZA: "No matter how long you cover a sin, it shall surely come to the open'' - Pastor Adeboye
Adele splits from husband Simon Konecki after eight years together