According to the official Twitter page of the Rapid Response Squad, a female lawyer, 47, has murdered her 50-year old husband who is also a lawyer. The  woman, Mrs Udem was said to have ripped his stomach opened, cut his genitals and placed it on his right hand. She then attempted to murder herself but was unsuccessful. She is presently receiving treatment at a Lagos hospital, where neighbours rushed her too and police ar monitoring her. While narrating this on Twitter tonight, the police said;

”Police detectives are investigating the death of a lawyer, Mr Otike Odibi, 50, who was allegedly killed by his wife, also a lawyer, Mrs Udeme Odibi, 47, at Diamond Estate, Sangotedo, Lagos. The couple were said to have been married for 3 years without issue.

”The man was found dead on the bed with his stomach ripped open. The killer severed his genital and placed it on his right hand. Source said, the suspect, Mrs Udeme had unsuccessfully attempted to commit suicide after allegedly killing her husband. Continue…

”She was rushed to the hospital by neighbours where she is currently receiving treatment. Sources further revealed that the couple married 3 years ago after the deceased divorced his first who bore him a daughter presently schooling in UK.

US Army general fired over Facebook messages to married woman

”However, the current marriage is said to be without a child. A neighbour revealed that the deceased called him on phone in the night before he was murdered, complaining that the wife was threatening to kill him with a knife. The neighbour said he warned him to be careful.

”The deceased was àlso reported to have called his mother and his younger sister complaining of threat to his life that fateful night. 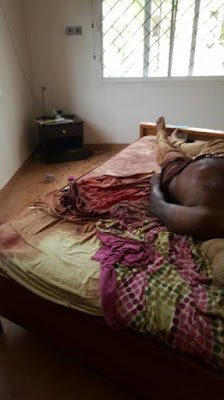 Shocking moment couple are caught having sex while driving down the middle lane of a Spanish motorway (Video)
Dear NBH Reader, Be Happy This Easter Season
"NYSC not a prerequisite to contest for governorship"- Court rules
Tanzania police creates surveillance to identify and arrest gay people on social media