A Nigerian police officer has been honoured by BBC for standing out and refusing to collect bribe all through his years of service.

Julius Adewale Adedeji, a superintendent of police currently serving in the Ekiti state police command, is being celebrated by BBC for being Nigeria’s “most dedicated police officer”. He is said to have never taken a bribe when it’s offered because it is “needless” for him.

In an interview, he told BBC that he was surprised receiving the award because he did not know he was being watched

He said: “I thank God that it’s recognised and I feel like putting my best more and more.

“A copy of the letter [from the BBC] was delivered to my office for my information, when I read through it, I was wondering could it be true? I read through the letter and I saw that it said, they wanted an institution where they can name and shame those that are not doing well and encourage the people that are doing well within the Nigerian police force, I felt so great.”

Adedeji said he has been offered bribe but refused it each time.

“Even today a person offered to give me some money and I said ‘no,no,no,no why would you do that, I’m just doing my work’,” Adedeji said.

He, however, admitted he has been tempted to take bribes.

“There’s no way one would not once in a while be tempted. But I just want to do what is right,” he explained.

He continued: “I know in my little space where I work, I’ve seen people who are going the wrong way. We’ve talked to them and told them you don’t have to do this and God will find a way to bless you when you’re doing what is right.”

After BBC shared the news on Twitter, social media users reacted to it. Some praised Adedeji for being a man of integrity while some said it is impossible that a Nigerian police officer has never collected bribe. 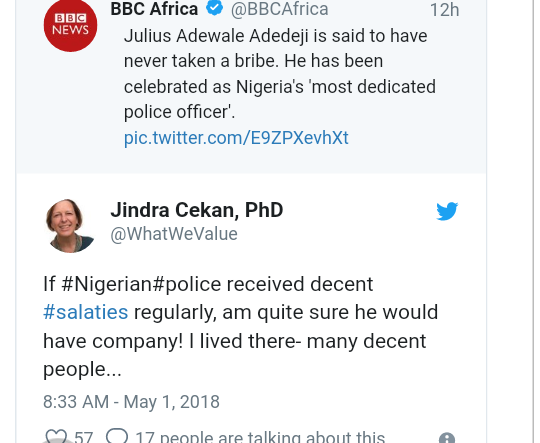 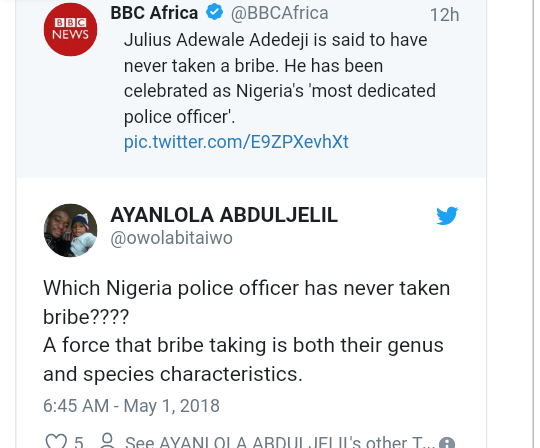 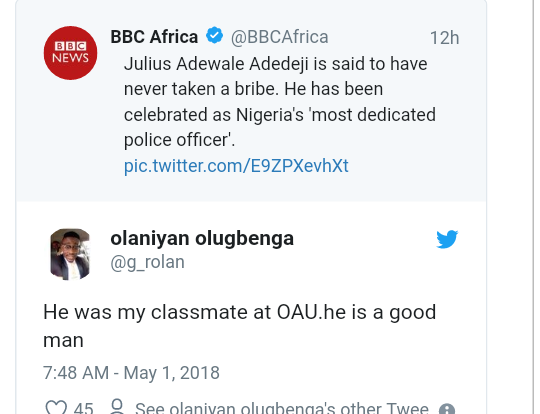