A naked man has been filmed walking across a petrol station forecourt to ask for help after he got a sex toy stuck up his backside. 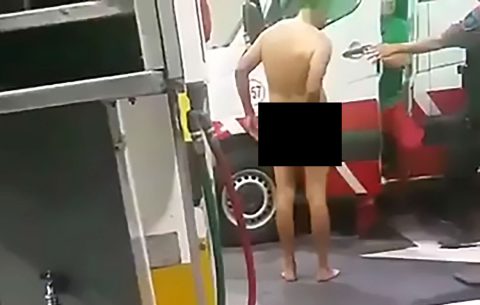 The unnamed man went towards an ambulance at the petrol station to seek help from the crew,UK Metro reports.

It’s not known how the sex toy became lodged inside him but the paramedics were quick to offer help.

The incident was filmed in the Saavedra neighbourhood in Buenos Aires, Argentina. Other footage shows him pacing up and down in front of police officers, shouting and slapping his legs in apparent discomfort.