A gang of moped-riding thieves, armed with machetes and axe, smashed their way into a luxury watch shop during a daring raid carried out in broad daylight.

The gang, consisting of six people, arrived on four motorcycles and targeted Watches of Switzerland – which stocks Rolex and Cartier pieces worth tens of thousands of pounds – in London’s Oxford Street just before 10am on Saturday, April 7th. 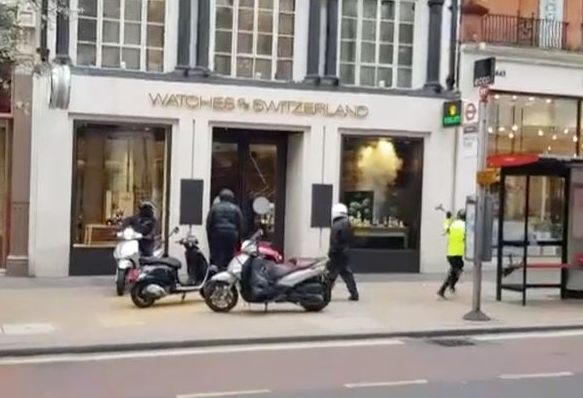 Upon their arrival, one of the mopeds was used to ram the front door of the store open while two robbers, whose faces were hidden by motorcycle helmets, burst into the store. Once inside, the pair spent just a minute ransacking display cabinets as four others remained on the pavement armed with machetes and an axe.

The gang were seen on video footage confronting bystanders during the brazen raid on the capital’s busiest shopping street. At one point, the pair inside the store appear to be trapped, forcing the thieves to ram the door again with another moped. Soon after, the pair succeeded in escaping with one thief clutching a black-coloured rucksack which is believed to be filled with stolen items. 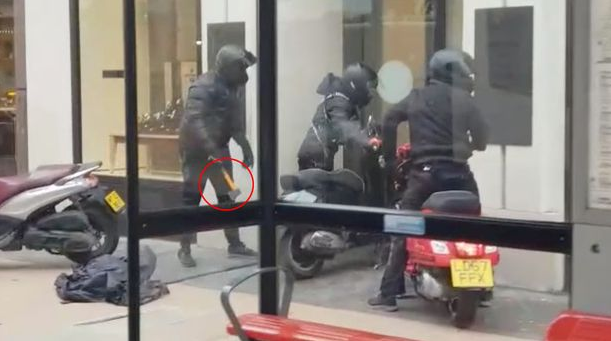 Afterwards, the gang fled along Oxford Street on three mopeds, leaving one red-coloured moped abandoned at the store’s entrance.

Footage captured inside the store, which was filled with smoke, showed two sledgehammers scattered on the floor. Display cabinets were seen smashed with a number of watches seemingly missing from them. 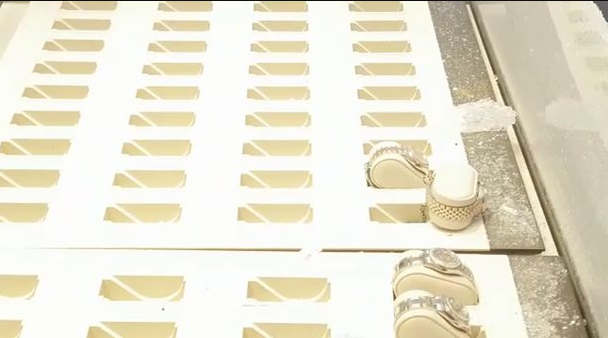 Police confirmed they were called to reports of a robbery.

A Met Police spokesman said: “Police were called to a commercial property in Oxford Street at 9.51am on Saturday, April 7 to reports of a robbery in progress.

“Officers attended. At this early stage it is believed that a number of persons on mopeds, possibly armed with metal bars, forced entry to the door of the venue and may have stolen stock from within. 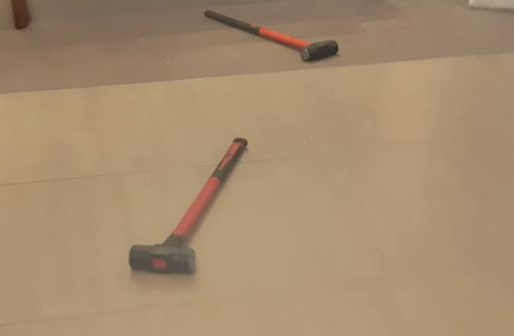 “No persons are thought to have been injured during the incident.

“Officers remain at the venue and a crime scene is in place.”

Watch video of the incident below.