According to an exclusive report by respected Nigerian journalist and magazine publisher, Dele Momodu, senate president, Bukola Saraki has joined the 2019 presidential race;

Though Saraki is yet to make any official declaration, Dele Momodu says, ‘The Boss can exclusively reveal that Senate President, Dr. Abubakar Bukola Saraki has joined the 2019 Presidential race. There is no doubt that he would be a formidable force that should not be ignored because only few politicians in Nigeria today have the pedigree, the experience, the clout and the connection of Senator Saraki. Having risen to the enviable position of the number three citizen, the only place to go for the two-term Senator and former two-term governor is up! Indeed, Saraki is not new to the dynamics of power politics, he is the scion of a political dynasty that is well-known across the nation’. 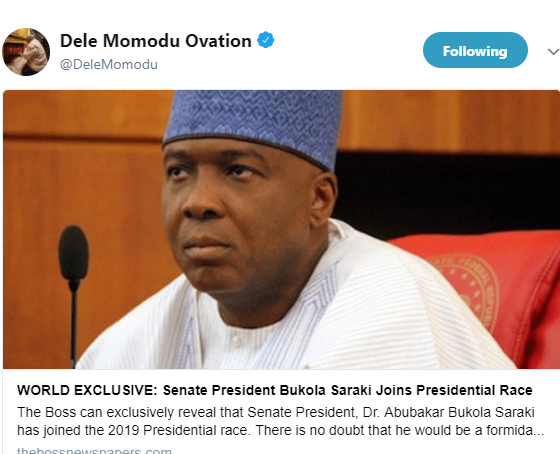 The Way You Hug Your Partner Tells A Lot About Your Personality
Categories: News