A snake charmer escaped death by the whiskers during a live show in Uttar Pradesh, India, after a deadly python coiled around his neck and almost strangled him.

At first, people thought it was part of an act, as the python coiled harder around the neck of the charmer who incidentally owns the snake, in an effort to kill him,Daily Independent reports.

But they soon found out the act was all too real.

The snake charmer initially picked up the adult snake and allowed it to sit on his shoulders as he welcomed the crowd; slowly, the snake slithered up the man’s body and started to wrap itself around his neck.

The man appeared calm, acting as if he was simply wearing a turtleneck and continued to motion people to come closer. 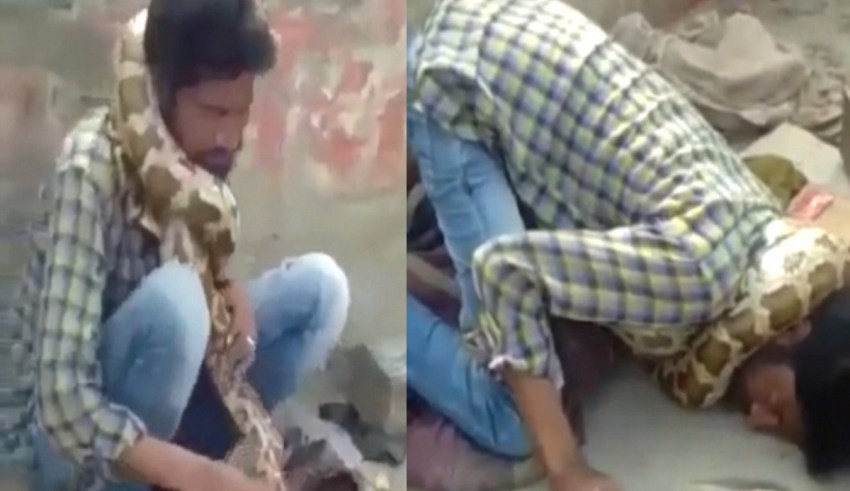 Thirty seconds later, the man kneeled on the ground and appeared to be having trouble breathing.

Wife beheads husband, buries him inside their bedroom

He leaned forward and grabbed the snake’s body, attempting to forcefully pull the creature off.

For nearly a minute, a group of people just watched in shock and horror.

They realized the man was in serious trouble when he toppled over onto the sandy ground.

He appeared to be unconscious when a man stepped in to help. He sprinkled water on the snake and eventually the python slitered away.

According to report, three men came forward and rushed the unidentified man to a nearby hospital in Varanasi on March 20. His condition is still unknown.

Rev. Father accused of raping an 11-year-old girl says "the devil" made him molest the child
Categories: News

Missy Elliott now the first female rapper nominated for the songwriters' hall of fame`
Macron’s Likely Victory Could Lead To A New Migrant Crisis
Nigerian homosexuals are the major asylum seekers in Canada - New Report
Watch:Katy Perry Reveals Some Of The Innermost Demons She Has Fought On Livestream