Incredible images show a ‘smiling’ deceased Buddhist monk being exhumed by his dedicated followers- two months after he died.

Originally from Cambodia, Pian spent the majority of his life serving as a well-known spiritual and Buddhist guru in Lopburi, central Thailand.

When he died, his body was returned to the temple where he served for burial. This week his followers removed his body from his coffin as part of a traditional Buddhist ceremony.

But they were shocked to discover the corpse had barely decayed and he appeared to have a ‘smile’ on his face.

Amazingly, Pian appeared to be smiling when his masked follows paraded him through the crowd

Spectators snapped pictures of the incredible moment and shared the photos on social media.

Video: The man you are looking at on the television is not Buhari, he is from Sudan- IPOB leader, Nnamdi Kanu says

Reports said the monks had removed the monk’s body in order to fit him with new, clean robes.

His body appeared in a state consistent with somebody who had been dead for no more than 36 hours.

Pian’s peaceful state has been described as a sign that the monk has truly reached nirvana.

The monk’s followers will continue to pray for him until a final resting ceremony is held on the 100th day of his death. 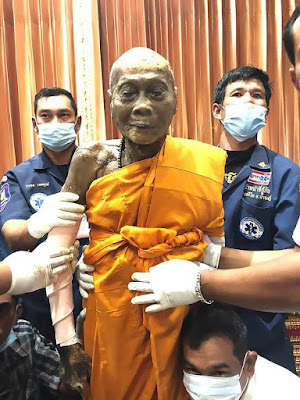 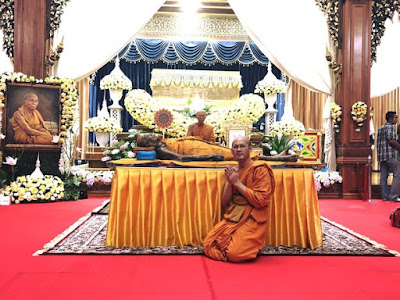