Prince Harry and former US President Barack Obama showed their fun side during a BBC interview, but the most interesting part was the rapid-fire exchange where Prince Harry tossed questions at Mr. Obama and he had to answer quickly without giving it too much thought. The interview with Prince Harry took place back in September for BBC Radio 4 and it was aired on December 27, 2017.

The interview was a case of the famous interviewing the famous and as both men are friends, it reflected in the interview. The prince took the seat as a guest editor for BBC Radio 4’s flagship program, “Today,” and broadcast a long-awaited interview in which he questioned the former president about the day he left the White House, his work since leaving office, and his plans for the future.

The pair had such a good time and Harry asked Obama some really unexpected questions, including asking him to choose between the movies, “White House Down or Olympus Has Fallen” to which Obama replied that he didn’t see either of the movies.

“You have to make a choice,” Prince Harry insisted and Obama countered: “I didn’t see either of them. How can I make a choice?”

“Boxers or briefs,” Harry asked next, taking Obama by surprise and the former President stuttered for a bit.

“Errr… Sorry, we don’t answer those questions,” he finally said.

He asked so many other questions and even went as far as bringing the Kardashians into it.

Obama’s reply was: “This one I have to defer on.”

“Harry or William,” the Prince asked next and Obama’s reply was: “William right now.”

As expected, Harry’s fiancee, Meghan Markle had to come in, though not directly.

“Queen or The Queen,” Harry asked.

Neither party mentioned President Trump by name, but the current US President was never far from the conversation. The two men discussed the risks of using social media and the corrosion of civil discourse. The interview was recorded in Toronto in September, when Prince Harry and Mr. Obama met during the Invictus Games, a sporting competition for injured military members and veterans.

Speaking on life after the White House, Obama revealed that since leaving office in January, he now has more time on his hands. He gets to wake up later, spend more time with his family and take control of his day, something he says he couldn’t do as president. But the things that are important to him have not changed.

“I still care about making sure that the United States and the world is a place where kids get a decent education. Where people who are willing to work hard are able to find a job that pays a living wage. That we’re conserving the amazing resources of our planet so that future generations can enjoy the beauty of this place. Like we did.”

“A lot of the things that still motivate me and move me continue to this day.”

Both men addressed Trump during the interview but neither mentioned him directly. They spoke especially about his use of social media as they discussed the role of social media in leadership.

Mr. Obama warned against the irresponsible use of social media by people in positions of power and expressed his concern about a future in which facts were discarded.

“One of the dangers of the internet is that people can have entirely different realities. They can be cocooned in information that reinforces their current biases.”

“The question has to do with how do we harness this technology in a way that allows a multiplicity of voices, allows a diversity of views, but doesn’t lead to a Balkanization of society and allows ways of finding common ground.”

Obama also mentioned that he had developed a thick skin during his presidency. Mr. Trump, in contrast, has been criticized since the 2016 campaign as thin-skinned and unable to rise above provocation.

Prince Harry also asked Obama what his thoughts were as he sat in the crowd, showing little emotion during the presidential inauguration on Jan. 20.

“The first thing that went through my mind was sitting across from Michelle, how thankful I was that she had been my partner through that whole process,” he said in a reflective tone.

Looking back, he said he felt a sense of completion as he handed over power to Mr. Trump. There was a “satisfying feeling that was mixed with all the work that was still undone,” he said, adding that he had “ concerns about how the country moved forward.”

“But over all, there was serenity there,” he said. 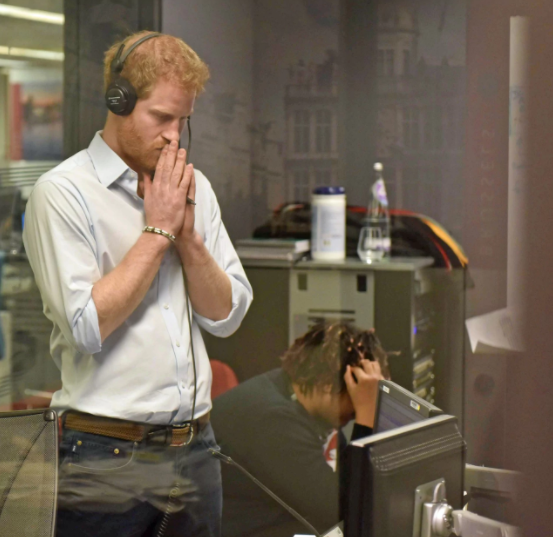 Prince Harry and Mr. Obama, who have a range of shared interests, also spoke about how to work together. Since meeting in London last year, they have been discussing ways in which they can work together to provide a platform to empower young people.

Prince Harry asked in the interview: “How do we make it a reality?”

Mr. Obama replied using his 2008 presidential campaign as an example.

“You have this African-American, mixed race, born in Hawaii, named Barack Hussein Obama and somehow he becomes president.

“How did that happen? Well it happened primarily because you had a bunch of 20-year-olds and 23-year-olds and 25-year-olds who started going out into communities that oftentimes they’d never been in before and believed in the possibilities of a different kind of politics.”

British tabloids, citing unidentified sources, reported this week that senior government officials were putting pressure on Prince Harry to leave the Obamas off the guest list, out of fear that if the Obamas are invited and Trump isn’t it would enrage Mr. Trump.

When asked about the issue by a Radio 4 host on Wednesday, Prince Harry sidestepped the question, saying that he and Ms. Markle were yet to work out who would be invited to their wedding, which is set for May 19.

Will @BarackObama get an invite to Prince Harry’s wedding? #r4today pic.twitter.com/YqnFTf6Yss

Go here to listen to the interview.