Hollywood stars are planning to protest against harassment in Hollywood by wearing all black to the Golden Globes next month in order to raise social awareness. But Rose McGowan, who is one of the actresses to accuse Harvey Weinstein of rape, is not a fan of this decision.

Rose has blasted the actresses who plan to protest, especially Meryl Streep who happily worked with Harvey Weinstein over the years. She says their silence is the problem and the protest will effect no real change.

“Actresses, like Meryl Streep, who happily worked for The Pig Monster, are wearing black @GoldenGlobes in a silent protest. YOUR SILENCE is THE problem. You’ll accept a fake award breathlessly & affect no real change. I despise your hypocrisy. Maybe you should all wear Marchesa.” 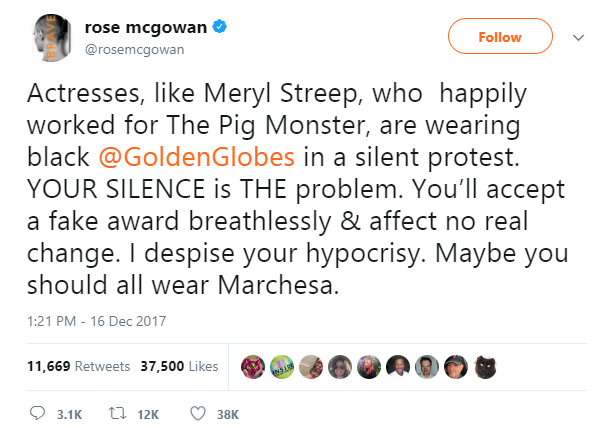 McGowan’s comment regarding “Marchesa” is a major swipe at all actresses who intend to protest. Marchesa is the fashion line of Georgina Chapman, the estranged wife of Harvey Weinstein.

Entertainment Weekly reported that the red carpet at the 2018 Golden Globes will be all black.

The red carpet will be all-black at the 2018 Golden Globes.

Multiple sources confirm to PEOPLE that many major actresses — including presenters and nominees (Jessica Chastain, Meryl Streep, and Emma Stone are among those nominated) — are planning to wear all-black looks as a symbol of protest against harassment in Hollywood. Sources say that this will start at the Golden Globes on Jan. 7, though it may extend throughout award season. Claudia and Jackie Oshry confirmed it on their show The Morning Breath as well.