alma Hayek has revealed Harvey Weinstein once threatened to kill her for repeatedly saying ;;no’to his advances.

Her refusal to give him what he wanted almost destroyed her 2002 film, “Frida,” which she worked so tirelessly to star in and produce.

The famous actress revealed in an op-ed for the New York Times on Tuesday the harassment she endured for years at the hands of Weinstein while trying to make her ultimately successful film, “Frida,” under Miramax.

“I was so excited to work with him and that company. In my naïveté, I thought my dream had come true. He had validated the last 14 years of my life. He had taken a chance on me — a nobody. He had said yes,” Hayek recalled of Weinstein’s deal with her to work on the Frida Kahlo biopic.”Little did I know it would become my turn to say no,” she wrote.

Hayek, now 51, did not detail specific encounters with Weinstein but glazed over the different things she said “no” to when asked by the disgraced film honcho. 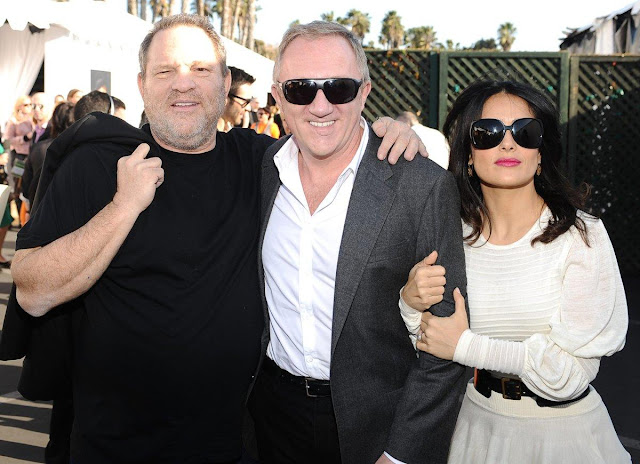 And with every refusal came Harvey’s Machiavellian rage.”Hayek said she believes Weinstein hated nothing more than the word “no.”

Hayek’s refusal to submit to Weinstein’s requests led to chaos with her beloved project “Frida.”

Weinstein told her he was offering the main role to someone else and Hayek was forced to obtain lawyers to work something out.

Ultimately, she pulled things together and was able to meet some of Weinstein’s demands on specifics for the cast and script — but he didn’t stop there.

“He told me that the only thing I had going for me was my sex appeal and that there was none of that in this movie,” she recalled.
“He offered me one option to continue. He would let me finish the film if I agreed to do a sex scene with another woman. And he demanded full-frontal nudity.”

Hayek attempted to avoid the nudity and Julie Taymor assisted her trying to get Weinstein to agree to a kiss with Ashley Judd at the end of the tango scene instead.

However, Hayek did cave in to doing nudity in order to keep the production on course.

Moments before the scene was to go down, Hayek had her first and only nervous breakdown — one that caused her to vomit.

She said she had to take a tranquilizer just to get through the filming of the scene. She said it helped her stop shaking, but made the vomitting worse.

Hayek — who was eventually nominated for an Oscar for Best Actress in “Frida” — penned the piece in The Times after keeping her story under wraps out of what she said was embarrassment.

She explained that she spent years being “cordial” with Weinstein despite feeling bullied like so many others. After being approached by Judd and reporters to share her story, she finally stopped hiding from “the responsibility.”