A stray dog has been filmed running from a hospital with a newborn baby in its mouth and then later reportedly feeding it to her puppies.

The horrific footage shows the little baby in the animal’s jaws as it trotted along a road unchallenged in India.

Local media reports do not make it clear if the baby was dead before the dog got hold of it, or whether it was the dog’s actions that caused its death.

The black dog was spotted running outside the a district hospital in the village of Gopalganj in the central Indian state of Madhya Pradesh.

Police and the hospital have launched investigations into the disturbing incident.

The baby and its parents have not been identified.

It is reported that locals who first witnessed the sight did not dare to tackle the dog to get the baby from it.

Police arrived on the scene but could only confirm that the baby was dead.

The dog’s puppies were found to be chewing on something thought to a part of the baby’s body, the local media reports read.

Gopalganj Station House Officer Sanjay Soni said: “As soon as we received the information, we reached the spot and found the body of a newborn in disturbing condition.

“The body has been sent for post-mortem.

“An investigation is underway to identify the child.”

Hospital doctor Arun Saraf said: “After the incident came to light, we started an investigation.”
; 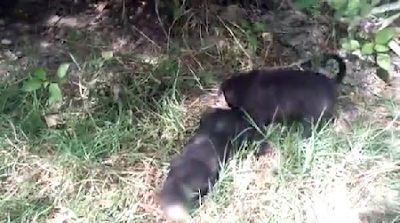