A former Catholic priest who has long been considered a suspect in the 1960 murder of a Texas beauty queen will stand trial.

John Bernard Feit, 84, was indicted on murder charges in February 2016 in the death of 25-year-old Irene Garza.

Garza, a schoolteacher and Miss All South Texas Sweetheart 1958, vanished in April 1960 after visiting Sacred Heart Catholic Church in McAllen for confession during Holy Week.

Her body was found in a canal five days after she disappeared. An autopsy revealed that she had been raped while unconscious and then beaten and suffocated, according to CBS.
Feit, who was a visiting priest at Sacred Heart at the time of Garza’s murder, was questioned by authorities but later ruled out as a suspect after church officials allegedly pressured police to leave him alone, the Houston Chronicle reports.

The case went cold for decades until police and Texas Rangers reopened it in 2002 and began interviewing witnesses. 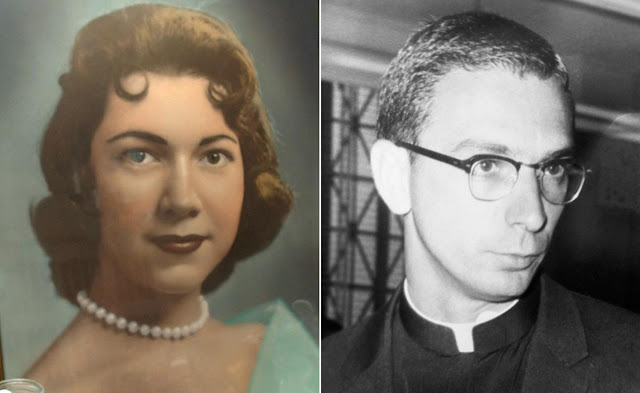 One person who talked to authorities was Rev. Joseph O’Brien. According to the Houston Chronicle, O’Brien told investigators that Feit had scratches on his hands around the time Garza vanished. The reverend said Feit also confessed to the killing.The re-opened case sparked a grand jury probe in 2004, but Feit was never indicted due to a lack of new evidence.

The case went cold again, until it became the center of the 2014 race for Hildago County district attorney. Ricardo Rodriguez, who was running to replace Rene Guerra, promised to re-open the case and bring justice to Garza’s family if he won.

After his win, Rodriguez requested a new grand jury which led to Feit being indicted in 2016. The former priest was arrested in February that year at his Arizona home and extradited back to Texas. Since being transferred, Feit has remained at the Hidalgo County jail under 24-hour medical watch because of his health.  The trial is set to begin with opening arguments at the end of the week.

Feit has repeatedly denied his involvement in Garza’s death.

“We grabbed each other, It is real.”-Wale Ojo On Kissing Omotola Jalade-Ekeinde
Categories: News