The Archbishop of York has put on a dog collar for the first time in almost 10 years, ending his symbolic protest over Robert Mugabe’s leadership of Zimbabwe.
In December 2007, Dr John Sentamu cut up his dog collar live on BBC One’
s Andrew Marr Show, promising not to wear one until Mr Mugabe left office.
He said Zimbabwe’s leader had “taken people’s identity” and “cut it to pieces”, prompting him to do the same.
On Sunday, he returned to the Marr Show and reinstated his collar as promised.
Mr Mugabe left office dramatically on Tuesday after 37 years of authoritarian rule. 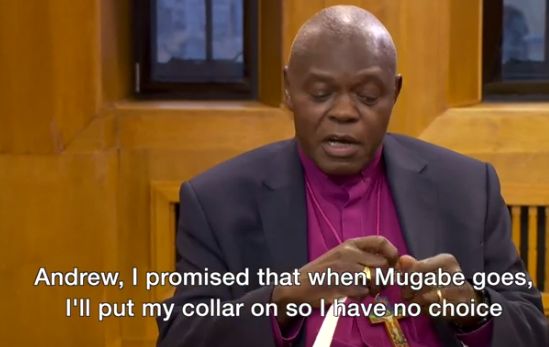 “Normally I [would] tie the top button and put on my collar, but for nearly 10 years I haven’t be able to. It has meant every morning I think of the people of Zimbabwe.”

After Andrew Marr presented him with an envelope containing the cut up pieces of his collar, Dr Sentamu said:

“You’ve been a very faithful friend, you’ve kept them – that’s lovely.
“I could attempt to put this one back together using superglue, but it would be a pretty ropey collar. And I actually think the message for Zimbabwe is the same. They just can’t try and stitch it up. Something more radical, something new needs to happen.”

#NgThecandidates: The many things President Buhari Said (video)
Human trafficking: 12 African migrants shot dead in Libya
17 Signs To Help You Spot Who Is Secretly Jealous of You
“Making Phone Calls At Filling Stations Is A Criminal Offence”- Police