Lorenzo Guidotti, a parish priest in Bologna, Italy has prompted outrage for blaming an underage girl, who was raped by an African man, saying that it was her fault for getting drunk and hanging around with immigrants.

“I’m sorry but if you swim in the piranha tank you cannot complain if you lose a limb,”  Guidotti, wrote on Facebook.

According to Italian media reports, in a lengthy rant he chastised the underage girl, who had told police she had been raped by a North African man she had met in the city while drunk.

She said she was attacked by him and woke up later, half naked and with her bag gone.

“Sweetie, I’m sorry, but… you get revoltingly drunk… and then who do you go off with? A North African?” the priest said in the post, which was published by Italy’s main papers on their websites.

“Do you understand that, along with the alcohol, you’ve gulped down the ideological tirade about ‘welcoming everyone’?” he said in a reference to those who support Italy giving needy migrants shelter.

“Darling, at this point, waking up semi-naked is the least that could happen to you,” he added. 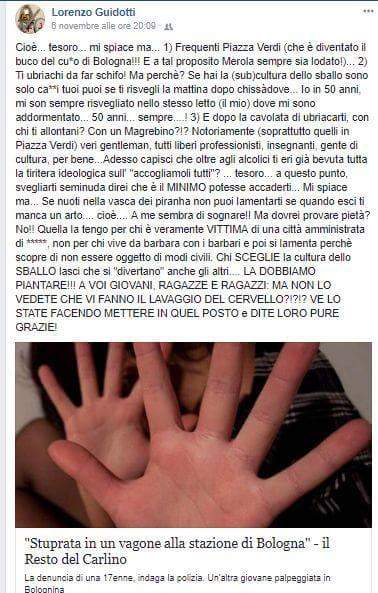 The Facebook post was only visible to Guidotti’s friends, but was picked up and published by Radio Citta del Capo on its website, from where it went viral.

The Bologna archdiocese distanced itself from the priest, saying his opinion “in no way reflects that of the Church, which condemns every sort of violence”.

Guidotti first claimed he had not been attacking the girl personally, just “trying to make kids and their parents think”.

According to La Repubblica daily, he later apologised unreservedly to the victim and her family.