A woman whose husband fatally shot himself got a glimpse of his face again after not seeing him for nearly two years.

Lilly Ross was 19-years-old and eight months pregnant when her late husband, Calen “Rudy” Ross killed himself in June 2016.

Ten years earlier, Andy Sandness, 21, had held a gun below his chin and pulled the trigger.

Miraculously, he survived, but surgeons couldn’t save his face. He spent years as a recluse, avoiding mirrors and social interactions.

A year and a half ago he received a face transplant from Calen Ross, whose widow he met for the first time at the Mayo Clinic in Minnesota on Oct. 27.

Lilly said she initially had reservations about the procedure. 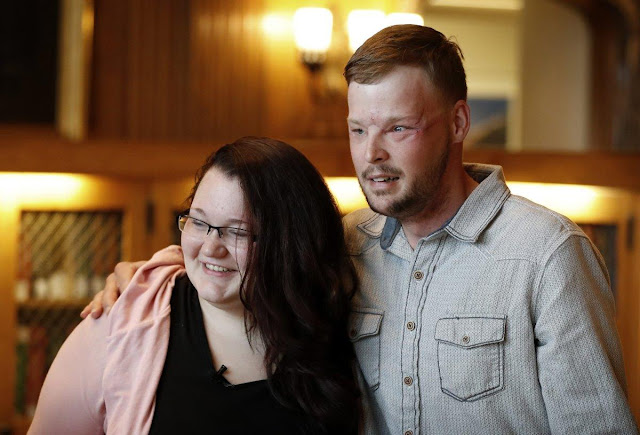 “I was skeptical at first,” she said. “I didn’t want to walk around and all of a sudden see Calen,” she told The Telegraph.

She was reassured that the prospective recipient had his own eyes and forehead, and would not look identical to her husband.

And so after consulting with her husband’s best friend, she agreed to donate his face.

Ross met Sandness for the first time at the Mayo Clinic in Minnesota. He was wearing her dead husband’s face after a successful face transplant nearly a year and a half earlier, The Telegraph reported.

Lilly Ross said she was relieved that Sandness did not look too much like her husband.

She recognized a hairless patch on Sandness’ chin, where her husband was never able to grow facial hair.Sandness is one of roughly a dozen people who are believed to have received face transplants. He takes anti-rejection medication daily and is retraining his nerves to operate in sync with his new face.