A teacher is in trouble for abusing one of her students who is disabled then sending photos of the abuse to the girl’s mother.

Rosa Smith, 26, is suffering from Cerebral Palsy, diabetes, along with other disabilities. Her teacher, Nesa Johnson taped her mouth because she wouldn’t stop talking, then sent a photo of the 26-year-old to her mother, along with a text that read, “Help. She won’t be quiet!!!”. This upset the mother and she immediately called authorities. 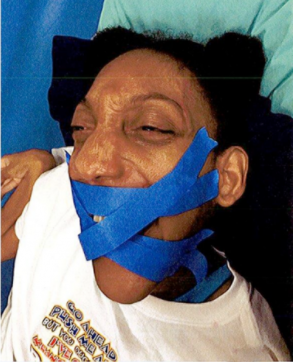 The teacher and the school are now in trouble. On Wednesday, a lawsuit was filed against High Point School in Ann Arbor where she attended.

“How can you sleep soundly when workers have been unpaid?” Buhari blasts Governors

“Taping a special-needs student’s mouth shut is appalling in-and-of-itself, but was especially torturous for Rosa, who is physically unable to remove the tape, has trouble breathing and clearing her throat, and breathes out of her mouth.”

“Defendant Johnson’s actions put Rosa’s life in jeopardy. Furthermore, hair and skin were missing from the area of Rosa’s face where Johnson removed the tape,” the lawsuit added.