There was confusion at the weekend in Potiskum Local Government Area in Yobe State after a goat gave birth to two creatures, which looked like human. 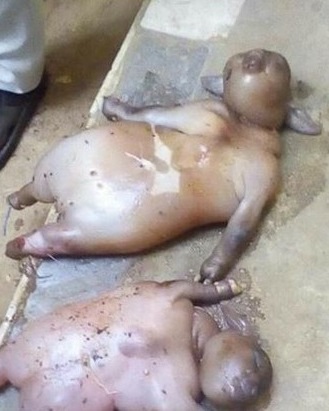 According to the reports making the rounds on social media, residents were thrown into shock after the goat delivered the “human form” animals.

Some say the owner of the goat or another person may have had sex with the goat.

Recently, such case was recorded in a village in San Luis Province, Argentina.

Earlier in the year, a similar case was also reported at the Kerala Community in Rivers State, where an unnamed woman who had been pregnant for two years, delivered a goat-like baby.

Pastor seeks to divorce wife of 25 years for placing curses on him with her private part
Man wears burqa to spy on cheating wife
Peter Andre Defends Michael Jackson Amid S-x Abuse Allegations: 'Don't Ban His Music'
Ten Schoolboys Gang-Raped Teenage Schoolgirl In India Until She Passed Out