A 24-year-old man, Pere Jongthong, who was reportedly suffering hallucinations from a mix of yaba and marijuana, allegedly killed his elderly neighbour and cut open the body so he could eat the liver.

Following the report of a homicide report, police rushed to a house in Ban Dong Suang in Tambon Dong Bang to find the body of homeowner Ton Lunubon, 79, on a bamboo day bed on the ground floor.

His throat had been slit and his stomach cut open. A bloodstained nine-inch knife was found nearby. 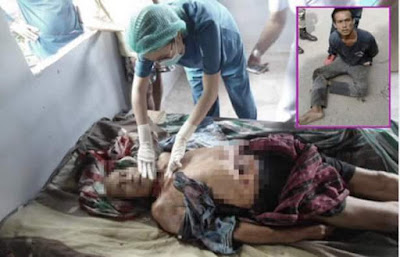 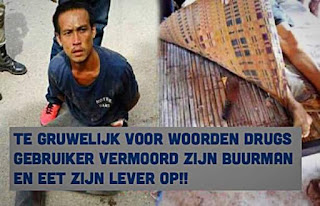 The suspect, whose clothes were soaked in blood, was apprehended by Pol Captain Wikrai Sriwasuk, who was passing by the area on a personal errand, and several volunteers.

They found a lump of human liver in Pere’s trouser pocket. The man, who was said to be in an obvious substance-induced hallucination and talking incoherently, was detained in a cell at the local precinct until he could police what happened.
He reportedly told them that he had taken a mix of yaba and marijuana before going to visit the elderly man. 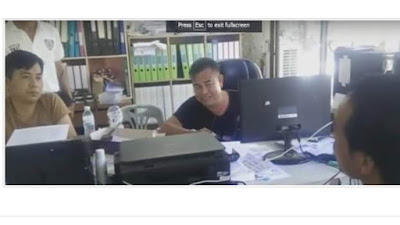 He allegedly said that he felt a sudden urge to eat a human liver, because this would make him immortal. So, he took up a nearby knife and used it to attack the man.

Witnesses who passed by the victim’s home said they saw Pere cut open the elderly man’s stomach as if searching for something. As people shouted at him in horror, Pere fled.

He will face a murder charge.

Rihanna wishes she could go back in time to 10 minutes before she lost her virginity
After 37 Years In Power, 93-Year Old Mugabe Will Contest again
Woman said to be world’s oldest living person celebrates her 131st birthday (photos)
See why Oprah Winfrey hasn’t been to the bank since 1988