Rajib Gain, 19, from Sathkira, Bangladesh, started suffering the mysterious condition at just three months old when he developed a tumour in his hand. Without an early diagnosis, the tumour grew and spread to his back and leg.

Rajib who weighs 59kg is unable to walk, sleep or change his clothes on his own due to the rare condition. He also has to sometimes keep his hand over his head to balance while standing. His condition was made public after his uncle, a famous activist known as Mamun Biswas, posted his picture on social media last week. Following that, Bangladesh’s health department promised to help Rajib access treatment. 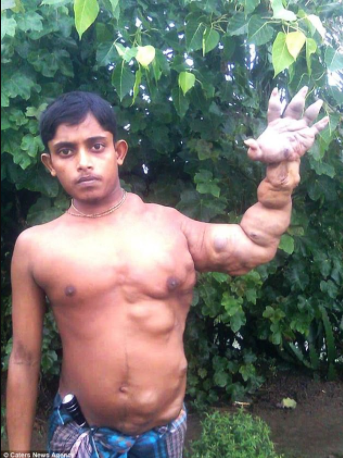 Mr Biswas said that the DG Abul Kalam of the health department has promised help to the boy and has asked the department to take all necessary measures for his treatment. They have asked Rajib to visit doctors at Dhaka Medical College so they can start treatment.

The teenager said: “If I get treated, I can lead a normal life, find a job and support my father in running the family.”

He added: “I am thrilled to be meeting these doctors. I am hopeful that they can finally end my ordeal. I want to lead a normal life like other boys in my school. I want to study further and work but no one gives me work because either they think I am inefficient because of my hand or they ask for money. But if I get treated, I can lead a normal life, find a job and support my father in running the family.” 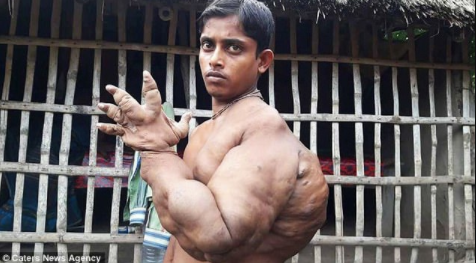 Rajib disclosed that he’s been the recipient of mockery from other children due to his condition and it affected his self-image.

He said: “My hand is so heavy that to maintain the balance while walking or standing I have to keep it over my head otherwise I fall. My body cannot take its weight. I cannot sleep peacefully. I have never slept peacefully in my life. I cannot change sides and have to lie down in (the) same position (the) whole night. It hurts my back. There is always a weird sensation, kind of tingling as if someone is pricking me with thousands of needles.”

In spite of his ailment, he tries to live a normal life, goes to school and endeavors to make friends.

He said: “Initially, I would feel inferior and think about why God made me like this. But soon I gathered enough confidence to go to school. My father enrolled me into a government-run school in the village. It was certainly not easy. Children mocked me for a long time but there were others who sympathised with me and supported me. They helped me when I needed. Eventually with their help I build the confidence back and could focus on studies.”

Man ‘Forced GF’s Son To Eat Cat Faeces Before Beating Him To Death Because He Was Gay’
Categories: Foreign News

Mexico: Veteran Journalist Killed On Busy Street In Broad Daylight
This is why you should never let your dog lick your face
Britain Faces Its Own Hurricane Scare
German Chancellor, Angela Merkel To Seek Pardon For Jailed Blogger