Many had predicted some day,Kanye West would produce a track with no words or beats and ask fans to imagine the music.Well,someone has beat him to it.A 10-minute-long track consisting of nothing but silence is breaking the iTunes charts.

The song is created for anyone who has plugged their iPhone into their car stereo only to have it automatically start blaring whatever song is alphabetically at the top of their list. 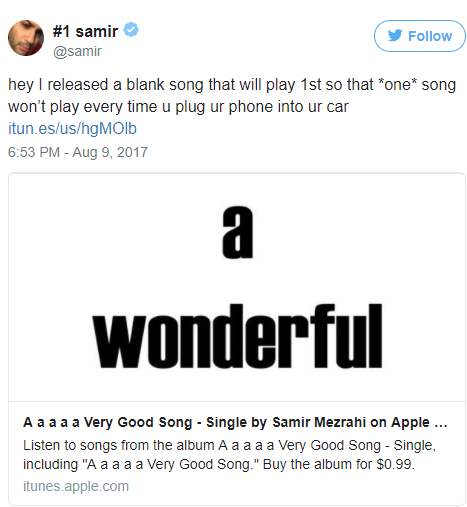 So what this song does is, instead of listening to the first song queued on your iphone, Samir Mezrahi’s silent song titled  “A a a a a Very Good Song” plays in utter silence.So you have enough time to search your phone and play the track you actually want.
Genius right?

As of Friday afternoon,the song was sitting at NO 30 on the iTunes chart……Not bad for silence!

Celebrating his success Thursday, the hushed hit maker tweeted out at Canadian competitor Justin Bieber, “Here I come for your #1 spot.”