The streets of New York, Washington, DC, and San Francisco, were littered with angry protesters after US President Donald Trump announced on Wednesday night transgender people serving in the armed forces are now banned, adding that the cost of transgender health care in the military as a ‘burden’.


Jega talks on the likely outcome of the 2019 elections
A transgender woman, identified only as Layla addressed the crowd saying she’s tired of being told who she can or cannot be. She added asking others in the LGBTQ community to come out and support trans people as they fight for respect.
‘Haven’t transgender people have gone through enough? I’m over it!’ Thorogood one of the protesters said, as he joined in the crowd from the Castro neighborhood to City Hall. 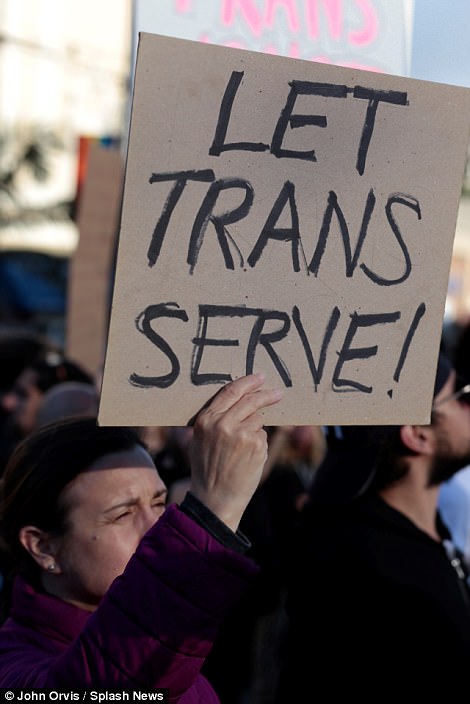 ‘When (Trump) goes for the people with the least rights, I just can’t sit back and let that happen,’ Rondoletto another protester added.
US Army Reserve member and transgender man Rudy Akbarian, 27, talked about the ban saying he at first he thought the news was a joke. The five-year military veteran said he was ‘heartbroken’ to learn it was real.
‘There are people who are retiring in the military, there are people who’ve done 18, 19 years and are about to retire and now it’s all taken away from them,’ he said. ‘It’s not fair. I know it’s not over. I know we’re not going to give up.’
So many others including celebrities have all spoken up about the ban, bashing Trump in the process.
'Boko Haram has no territorial hold anywhere In Nigeria' – President Buhari
Tags: Trump Trans Ban
Categories: Foreign News