A shocking video has emerged showing 18 prisoners in orange jumpsuits getting shot in the back of the head from point-blank range in summary executions in Libya.

The men, understood to be ISIS fighters, are shown kneeling in four rows and facing away from their killers.

Executioners can be seen walking up slowly behind their targets before firing a spray of bullets from what look like semi-automatic assault rifles into the backs of their heads before another line of killers repeat the sequence.

It comes amid tensions between jihadists and Libyan forces in Benghazi after strongman Khalifa Haftar – a former soldier under the Gaddafi regime who has risen through the ranks to commander of the Libyan National Army – declared victory in the eastern city.

The gruesome video,  shows all 18 men in orange jumpsuits falling to the floor after being shot, but it it not clear who is pulling the trigger and giving the orders.

It is claimed by the Libyan Express the commander of the eastern Saiqa Force of Operation Dignity Mahmoud Al-Werfalli conducted the massacre.

He was also said to have ordered the killings by the Libyan Observer, who reported he had been promoted by Haftar, leader of the Libyan National Army, for his alleged role in killing policemen in May. 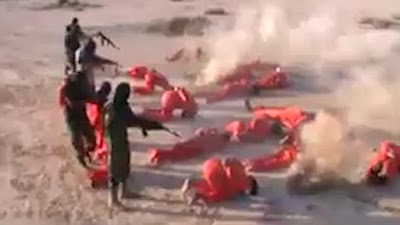 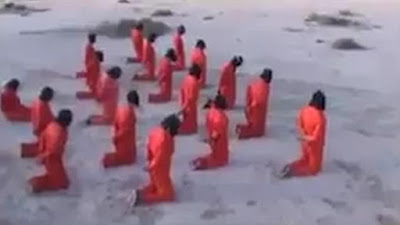 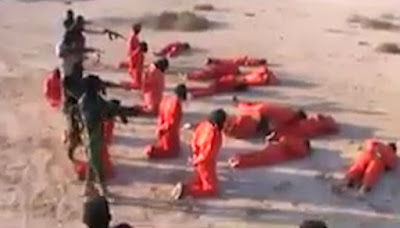