A stomach-churning video shows forest officials in India pulling a goat out of the mouth of a 15ft python.

Scores of villagers gathered in Jaitpur village in the central Indian state of Madhya Pradesh on Wednesday when they spotted the snake devouring its huge snack.

The snake had ventured into the village from the nearby forest before attacking its prey.

A team of forest officials and a snake rescue expert tried to save the goat, but it was dead by the time they freed it from the python’s clutches.

Though the snake was relatively slow-moving after its huge meal, it took the officials hours to catch the snake as it had taken refuge in a pit among the bushes.

Akhil Baba, the snake rescue expert, said: ‘It was a 15ft-long python. To take the reptile out from the pit among the bushes was a tough job but we managed it well with the help of villagers.’

A video taken by an onlooker shows Mr Baba holding the mouth of the python while other wildlife workers pull out the goat.

Rawat Tiwari, a forest official, said: ‘We tried to save the goat but when we pulled it out, it was already dead.’

The python was later released into the forest. 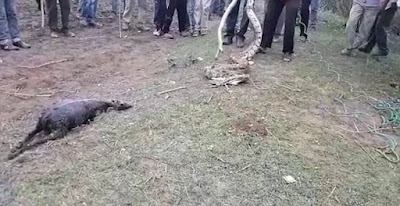